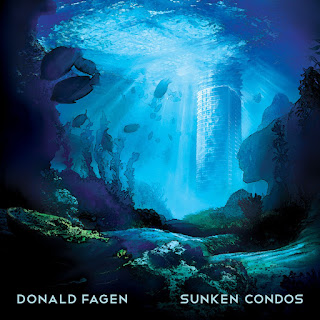 There's barely any difference between a Donald Fagen solo disc and a proper Steely Dan one.  Fagen always does the vocals with the Dan, and since he and Walter Becker are of such like minds about the music they want to make these past decades, taking Becker out of the mix isn't a big deal.  Here he's replaced by co-producer and trumpet/synth/keyboard guy Michael Leonhart, but it doesn't do a thing to alter the usual Dan sound.  Which is grand, of course.

Really, not much has changed in Fagen's musical world since Gaucho in 1980.  It's smooth, groovy jazz, extremely clean and expertly played, with witty observations on modern life and slightly twisted tales of less reputable folks, our singer included.  The only thematic shift is out of necessity, as Fagen has grown older.  Now he speaks to younger generations, whether as a skirt-chaser everyone knows is too old (Slinky Thing), or a has-been in the eyes of the dot-com generation (The New Breed).  There's a little bitterness there, as he loses the girl to someone younger and stronger, but also he's holding on to the last laugh, knowing tough times are ahead for the youngster that he's already survived.  Anyway, as always his lyrics are fun, full of shady characters and words you won't find elsewhere.  Lithe, for instance.

Sunken Condos is one of the most rewarding listens since Gaucho as well, and perhaps its because it's more funky.  It's got a more soulful selection, including the gangster number Good Stuff, with its choppy rhythm guitar and classic Fagen horns.  As always, there are the female voices grooving along with The Donald on the choruses.  The big surprise is an actual cover, a rare thing indeed in Dan land.  They did a Duke Ellington number way back in the 70's, and now we get an old Isaac Hayes number, Out Of The Ghetto, all clavinet and funky bass.  Hey, and there's even one of those really killer guitar solos you used to get back in the day with Steely Dan albums, in the song Weather In My Head.  So I guess what I'm saying here is:  Like Steely Dan?  You should pick this up.
Posted by Bob Mersereau at 7:00 PM