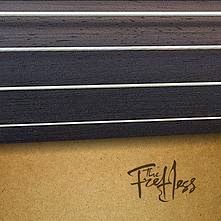 Don't fret, they had planned to be back. Waterbound, the debut album by The Fretless was a huge success, grabbing Canadian Folk Music Awards for both Instrumental Group and Ensemble Recording in 2012, thanks to their totally fresh sound. They are all classically trained players, bringing their talent and technique to folk, coming up with new arrangement ideas and of course, playing impeccably. This time, in addition to originals and traditionals, they take it further, covering Radiohead's Airbag of all things, featuring guest vocals from Ruth Moody. I like it better than the original.


Aside from one other vocal, this time with Moody and Oliver Swain, the real business is folk melodies with fascinating, weaving arrangements by the three fiddlers, er violinists, and the cellist. Grabbing snatches of most old folk-fiddle styles, the sawing up front is adorned by intricate harmony lines and complex four-part arrangements. Hearing these tunes, which conjure up thoughts of Celtic colours, turkey in the straw and Civil War documentaries, now gussied up with orchestral precision and virtuosity, is the best of both worlds
Bob Mersereau at 4:20 PM
Share