MUSIC REVIEW OF THE DAY: JERRY LEGER - NONSENSE AND HEARTACHE 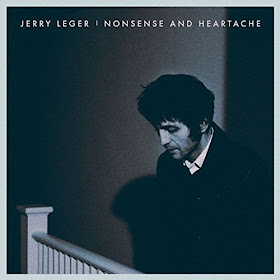 Two albums in one from Leger, Nonsense the first and Heartache the other. They really are different approaches, the first being an electric wild blues set, the second a singer/songwriter album with an acoustic core, the two sides of Leger.


Produced by Michael Timmins (Cowboy Junkies), the gang went for the rough-and-ready approach, recording everybody playing together as a live unit in the studio. The Nonsense album has a real Highway 61 Revisited feel, bookended with a couple of epic tracks, "Coat On The Rack" and "She's The Best Writer You've Never Heard Of." The groove is loose, the guitars raunchy, and Leger lets his voice get raw when needed. I actually don't think it's nonsense though, there are some powerful and unique images here, as heard in the above two titles, and others such as "Baby's Got A Rare Gun" and "The Big Smoke Blues."


Heartache features acoustic guitar and piano, lap steel, fiddle, upright bass and brushes on drums, plus more harmonies. These aren't all ballads, but more country-flavoured numbers with an Everly Brothers/Buddy Holly feel on some, Western mystery on others ("Another Dead Radio Star"). When he does get quiet, as on "It Don't Make The Wrong Go Away," he employs powerful language that intensifies the impact. The only problem with these albums is trying to decide which to play first.
Bob Mersereau at 10:01 AM
Share