MUSIC REVIEW OF THE DAY: BRUCE COCKBURN - BONE ON BONE 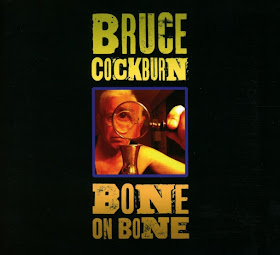 Bruce Cockburn reaches another milestone later this month when he's inducted into the Canadian Songwriters Hall of Fame, but instead of a victory lap, this new album sees him at the top of his game. It's a welcome return too, as he hasn't released a new album of songs since 2011's Small Source Of Comfort, after putting all his creative energy into his 2014 autobiography Rumours Of Glory, and a new daughter born during that time as well. But the bug returned when he accepted an assignment to write a song for a documentary on the poet Al Purdy, an experience when led to all these songs.

It's always good news when Cockburn puts his spirituality forward, a particular and unique faith that also encompasses his world view and personal politics. It's also heard loud and clear in several songs here that have a blues-gospel feel, aided by members of his church choir on lively vocals. Returning too are long-time producer Colin Linden (Blackie & the Rodeo Kings) and his core rhythm section of Gary Craig and John Dymond, pretty much the top roots group in the country. Everything from Cockburn's gentle trance-hymn 40 Years In The Wilderness to his cover of Rev. Gary Davis's Twelve Gates To The City is from that well where music is food for the spirit.

Of course, Cockburn's no softie, and his righteous anger and biting observations are still powerful. False River takes on the Kinder Morgan pipeline project in B.C., while Cafe Society puts us in the coffee shop overhearing the cappuccino drinkers making inane comments on current events. Elsewhere there's an instrumental, a song in French, and of course, Cockburn's tremendous guitar work, all the touchstones and moments we've cherished over his 50-year career. This album has the qualities that should leave it placed among his very best.

Bone On Bone will be launched Friday, Sept. 15 with a show at the Fredericton Playhouse during the Harvest Jazz and Blues Festival.
Bob Mersereau at 1:16 PM
Share