MUSIC REVIEW OF THE DAY: THE HYPOCHONDRIACS - IN 3/4 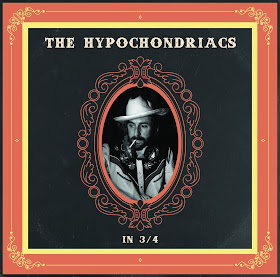 Real rockabilly is deceptive. It seems simple enough on the surface, but the stuff from the late '50's was dangerous. Not the corny shtick that the era has been stuck with since American Graffiti either, there was actual physical danger playing country music mixed with rock 'n' roll, refusing to accept the status quo of race and religion. That was reflected in the music, not just the hard-driving songs but the lyrics too. This people did bad things, and you'll hear about people that crossed the moral lines of the day.

The Hypochondriacs get that danger. The Fredericton band fills its eight-cut debut with true love gone very bad, ex-couples putting themselves through hell via breakup and cheating. Opener Just Like Before sets that clear; this is not a relationship the singer is going to forget, and there won't be any forgiveness either. Like the rockabilly days, the guitar is loud and distorted, especially at the end, leaving us with a sense of foreboding. Two Bottles Of Whiskey is worse, a husband and father abandoned, not knowing if they can love again, giving up and downing the booze. At the end, we find out he has a bottle of pills as well, and he's about to swallow them too, the last line being, "I miss my wife." To remind us that we're now in 2017, there's some atmospheric sound at the end, kind of a Twin Peaks feel, which works just fine.

Hung Up and Hung Over sounds more fun, with its happy rhythm, mighty twang and rowdy backing vocals, but it's more on the same theme, getting dumped. This time though, the band has a tongue-in-cheek finish in store, first a reggae version, then almost a hair metal chorus to close. The title cut, a weepy ballad heavy on the pedal steel, has a strong lyric with a great central couplet: "That was the day that you waltzed out my door/in 3/4." That's waltz time for you folks who didn't get music education in our school systems. The Meeting Place breaks the woman dumps man mold, instead being about a preacher who runs afoul of his flock at the church he established, some of those fire and brimstone rural roots that fit the rockabilly playbook.

Rockabilly, like soul, r'n'b, reggae, folk and all those roots sounds, is still very much a working music, when it's done right. The Hypochondriacs do it right, make it their own, and make it vibrant and new. The group is releasing the album with a show in their hometown of Fredericton on Saturday, Sept. 9 at 9 P.M. at the Capital Complex.
Bob Mersereau at 8:45 PM
Share