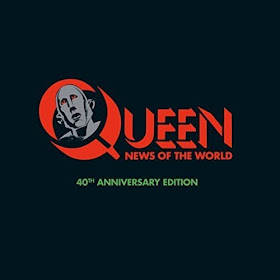 Queen's 1977 album marked a big shift for the band, after five albums of complex, "baroque" pop, as they called it. While England had loved them all along, there were some rumblings about the group being out of step with the new rawness of punk. Meanwhile, in the U.S., the audience was still on the fence. 1976's A Day At The Races had done well, and the single Somebody To Love was a hit, but further singles were a little too complex for the Top 40. This was a driven group however, and they were more than willing to change and progress, plus confident enough that they believed in themselves to pull it off. Cocky even.

They decided to go back to band basics, just the core instruments and not spend so much time layering parts in the studio. So, no Bohemian Rhapsody then. However, they had something even catchier up their sleeves, in We Will Rock You. Brief but incredibly catchy, it was basically the perfect statement for a band, and it did the trick of making the group viable at home at a time when old-school rock was being rejected, and it caught fire on the U.S. charts. That was backed up by another of their immense anthems, We Are The Champions, making for a huge double-sided hit. The album eventually sold four million copies in the U.S., and they had become a superstar band around the world.

Forty years on, big super deluxe boxed sets are now in vogue, and if any group is made for that treatment, it's Queen. Bigger always means better with them, and fans will love this gorgeous set. The hard-box edition includes the original album on vinyl, and they've gone back to the original master tapes for a newly-mastered pressing. The three CD's included feature the album again, and two discs worth of previously unreleased material from that era. The second disc is one of those sets where they present an alternative version of the album, each track a totally different version taken from the album sessions or demos. This includes some notable differences, including guitar openings that got cut out, Freddie Mercury's original vocals original vocals on the cut All Dead, All Dead, which didn't make the album, and a couple of Roger Taylor numbers that he did on his own before the studio versions. Disc three is packed with live cuts, BBC sessions, more studio work, and a true out-take that didn't make the album, a good cut called Feelings Feelings. While the backing tracks and instrumentals are merely that, for you karaoke fans, for once the BBC sessions are incredibly different. The band used the opportunity to experiment rather than mirror the studio takes. That includes doing the fast version of We Will Rock You, the part two of the song that they did live. Roger's punkish Sheer Heart Attack sounds especially good in its live version.

There's a documentary DVD as well, called Queen: The American Dream. That title is a bit misleading, as the doc also covers the band back home, changing their sound, but the bulk was shot back in the day while the group was starting the U.S. tour that really broke the group. Luckily there was lots of great footage and interviews, and as usual, they were confident enough to be themselves and trust the fans to accept their personalities. They admit to their collective ego, but you can't argue the results of course, they simply were a huge band, able to sing We Are The Champions and know what that sounded like. They allowed an audio tape of a nasty fight to be used, the stuff most bands would rush to hide. And while they sound ridiculously posh, and look smug, they weren't from the streets, so at least they aren't pretending.

There's a high-quality, hard-bound book of essays, photos and stats, and lots of memorabilia replicated, including a poster, promotional newspaper, photos, even a back-stage pass. Queen fans are the kind that don't mind spending an extra few dollars on more Freddie, and this set delivers a lot more than you would have thought was left in the vaults.
Bob Mersereau at 3:37 PM
Share