MUSIC REVIEW OF THE DAY: TEARS FOR FEARS - RULE THE WORLD 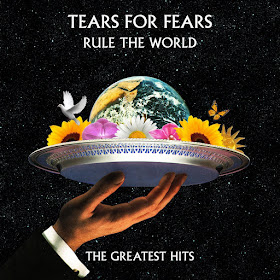 Not many bands have weathered the split and subsequent reformation of the two main partners so well. Tears For Fears did in fact rule the world in the '80's, as this best-of so amply shows. Then in the early '90's the rot developed, with their manager caught helping himself to their money, and the pair at odds over that and band development. Smith left, and Orzabal got to keep the name, delivering two decent albums, but with diminishing returns. Then surprisingly in the 2000's, Smith returned, new music was made including the appropriately named Everybody Loves A Happy Ending, and quite a bit of live work has followed, including this year. A new album has been in the works for awhile, including two tracks featured here among the hits.

And hits we got. There's a surprising number of them, given that they only made six albums starting in 1983. The monster, '85's Songs From The Big Chair, had five of them, pretty impressive given the album only had eight cuts. Those five are all here: Shout, Everybody Wants To Rule The Work, I Believe, Mother's Talk and Head Overs Heels. Even with that dominance, there's still room to drop in on each album, including another three from the debut The Hurting: Mad World, Pale Shelter and Change. That's half the hits collection right there, but those were the big albums.

1989's The Seeds Of Love is generally considered the album where they jumped the shark, but I've always liked the grand opulence of it, and the move away from synths to guitars, strings and loads of musicians and a big production. Sowing the Seeds of Love and Woman In Chains both sound great today thanks to that. The Orzabal-only years yielded two albums that didn't match the usual sales marks for the group, but the two cuts included, Break It Down Again and Raoul and the Kings of Spain sound strong beside the better-known hits, as does Closest Thing To Heaven from the the 2005 reformation album.

Now we get the first new music in 13 years (other than some covers that have snuck out in various places), and the two samples bode well for the new album. I Love You But I'm Lost and Stay both have that dramatic feel and instrumental brightness that typifies the Tears For Fears sound, and given the enthusiastic crowd support they've been receiving, it should be a hardy return for the group in 2018.
Bob Mersereau at 9:07 PM
Share