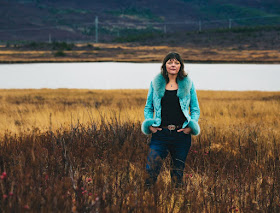 Newfoundland's Sherry Ryan kicks off a tour tonight to launch her latest album, called Wreckhouse. The singer-songwriter is a deceptively strong lyricist, her songs uncluttered and spare, and she doesn't throw around complexities and verbage. But the imagery is powerful and the metaphors large. In Cool And Clear, she compares a relationship that has ended to the difference between day and night, weather-wise: "Humid and hazy, loving and lazy days are gone," the break-up like the night, cool and clear. The answer to a Long Awaited Question (we're left to guess what that question might be, but it's a relationship one she's trying to avoid) is left untold, "drifting like a bottle at sea."

The track Stop The Trains, where the album title comes from, is worth a full write-up itself, one of those stories so good it can only be true, and it is. Written with her father Jim, who was familiar with the tale, it tells about the so-called wreckhouse winds in an area of Newfoundland, so strong they could blow the train off the tracks. Only one Lauchie MacDougall, known as the "human weathervane", knew when those mean gusts were coming, and this song, set in the '50's, tells what happens when a smart-arse from away decides Lauchie shouldn't be in charge of stopping the trains. With it's book-chicka-boom country rhythm, it joins the ranks of the classic train numbers.

Ryan's music is that hard-to-classify sound that we reviewers tend to call roots, and it actually fits well here. She has country leanings, singer-songwriter melodies and a band that can rock, with some rich organ and pop harmonies. Vocally she's homespun and real, singing like she's telling you a story over a drink. Catch her over the next few days in Ontario and Quebec at: