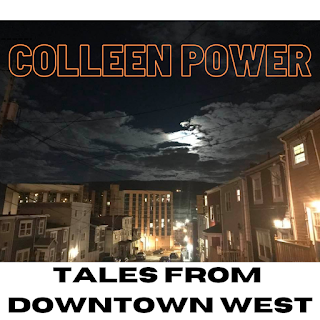 Here's another use of Covid down time. St. John's mainstay Colleen Power took the RPM Challenge in February. That's Record Production Month, and the goal is to make an entire album by yourself, from songwriting to finished product. Power managed just that, coming up with six strong new ones, and doing all the playing and producing herself. That includes vocals, guitar, bass, dulcimer, drum programming and editing, ukulele and accordion.

You get a bit of everything Power is about in these tracks. There's Newfoundland whimsy, trad, biting wit, social observation, punk attitude, Francophone, grass roots and modern folk. In the sharpest bit of commentary, she uses the tiktok trend of sea shanties to skewer the socio-political climate of her own province. "NL Sea Shanty" chides the province for being "Halif an hour later b'ys, and fifty years behind." Power isn't pulling any punches with this one: "While the world is wielding windmills, we're bawlin' out for oil/Join me in this sea shanty, pretend you're Alan Doyle." On a softer note, her "Purple Aster" is a ukulele charmer, maybe the first song tribute to that hardy flower. Her downtown St. John's street cred comes through solidly on "Spell For A Broken Mirror," with "Bad luck, bad luck, enough to fill up a dump truck."

The pandemic has curtailed the usual St. Patrick's Day shenanigans in St. John's, but not the music, and Power is doing her bit of celebrating on Facebook Live. Join her at 8:30 PM NST (which is 8 PM Atlantic, 7 PM Eastern, etc.) at www.facebook.com/ColleenPowerNL. And to pick up a copy of Tales From Downtown West or any of her other releases, go to www.singsonginc.ca.