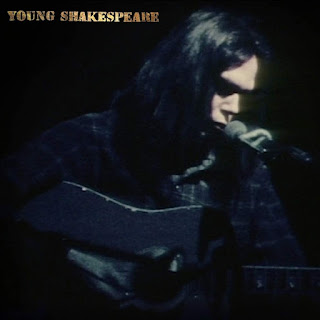 Just imagine the people who went to this concert in January of 1971, and said after, "It was good, but he played a bunch of new songs nobody knew." It would be a year before they came out on Harvest, and that night Young treated the crowds to the brand-new "A Man Needs A Maid," "Old Man," "The Needle And The Damage Done," and "Heart Of Gold." They didn't know how lucky they were at the Shakespeare Theatre in Stratford, CT.
This new LP/CD/DVD is billed as the earliest concert film of Young, but let's be realistic. He looks and sounds the same as he did all for decades, at least when he did these acoustic shows. More importantly, it's a strong show from this crucial time in his career. His songwriting was flowing so well that he couldn't afford to stand still and promote his just-released album After The Gold Rush. The set features just two of those tracks, "Tell Me Why" and "Don't Let It Bring You Down." He did the CSNY favourites "Ohio" and "Helpless," but it was the unreleased material that really held his interest.
Definitely the high point is when he switches to piano, an instrument he admits he's still learning. But he's used it to write stunning new material. We get his "Man Needs A Maid/Heart Of Gold" suite, still in its original medley state. It's funny how "Heart Of Gold" was the afterthought at this point. In introducing "Maid," he explains his recent back injury (slipped disc) had left him bedridden for a time, wishing somebody would clean up. That might have inspired the "maid" lines, but the real story here is the bit about "I fell in love with the actress," a reference to his new relationship with Carrie Snodgrass, probably the heart of gold. Young stays at the keys for "Journey Through The Past," such a strong number it would be saved for his experimental film of the same name the next year.
Young fans will know this this show was a mere three days after his Massey Hall concert, released in 2007. That featured a longer setlist, and the only difference here is an encore of "Sugar Mountain." Also, the Massey Hall show had a DVD that linked up those cuts with this same exact film footage, since at that point, they didn't realize they had this good audio from the Shakespeare Theatre set. Well, never mind, it's good to have the video and audio now in its proper place, and the Shakespeare show is more serious and quiet, without the excitement of the audience at the hometown Massey Hall gig. It is Young at the very height of his songwriting prowess. You can buy the CD, LP or a deluxe set with the DVD and both audio versions.
Bob Mersereau at 2:04 PM
Share