MUSIC REVIEW OF THE DAY: BAND ON THE RUN 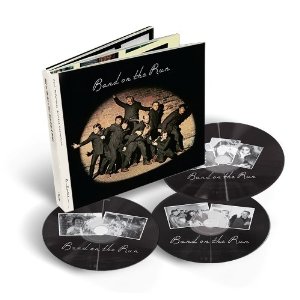 It isn't the first time Paul's acknowledged best has been given a deluxe treatment, but it is an improvement over the last version, and makes for a dynamite way to rediscover this old favourite.  As is the trend these days, there are a couple of different ways to get this, with the most expensive going for fifty bucks, with 3 CD's, a DVD, and a nice big book.  Far more affordable and sensible is the 2 CD - 1 DVD version, going for around $20.  You miss out on an audio documentary that came with the old reissue from the 90's, and it isn't really that great.

But the 3-disc set is.  In addition to the original album, you get a second disc of period singles and b-sides (Helen Wheels, Zoo Gang), plus several cuts from the One Hand Clapping documentary, which was basically Wings live in the studio playing cuts from Band On The Run and some others.  Then, the DVD is a gas, with the original One Hand Clapping film, which is very cool.  You can tell this is one fine live unit, even if Denny Laine comes across as either a complete moron or incredibly stoned.  Also, there are several promo films from the time, including a nice animation for Band On The Run, another for Mamunia, and footage in Nigeria, plus behind-the-scenes at the famous cover shoot.

So, if you're a fan, you'll love this set.  As for the original album itself, here's why it's his best:  It's one heck of a great production, with a great mix of rockers (Jet), ballads (Bluebird), and McCartney whimsy (Picasso's Last Words).  It flows, it has the feel of a journey, from the Band On The Run at the start, to the futuresque (for then) Nineteen Hundred and Eighty Five at the end.  These aren't his best lyrics, in fact they are sometimes feeble, for instance the "Jailer Man and Sailor Sam" of the title track, or the plain nonsense of Jet.  What McCartney had learned by then is that it's more important if they sound right than if they win any Nobel votes.  Leave that to Dylan, this was arena rock he was crafting.  So while "I can't tell you how I feel/my heart is like a wheel" is far from his greatest line, "Let Me Roll It" is one of his best songs.  Go ahead, listen again if you haven't in awhile, and you'll find yourself pretty happy, if you're any kind of a McCartney fan.  Me, I think Ram is a better artistic effort, but that's another argument.
Posted by Bob Mersereau at 7:47 PM