MUSIC REVIEW OF THE DAY: LEONARD COHEN - BIRD ON A WIRE 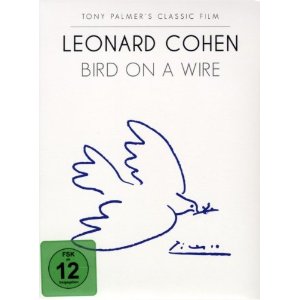 Back in 2008, I was interviewing famed British filmmaker Tony Palmer on the phone, and mentioned I was going to see the premiere show of Leonard Cohen's world tour that night.  Palmer was in a hotel in Toronto, and got excited, telling me he was trying to get a hold of Cohen, to try to track down an old film they had made together.  Would I pass on a note for him, asking Cohen to get in touch?  Well, the note was duly passed on.  I don't know if they hooked up, but the lost raw film was found, apparently in a Hollywood warehouse, and Palmer re-edited his long-missing film.

Palmer was given complete access to Cohen's 1972 tour of Europe, on stage, backstage, Cohen taking a swim in the nude, Cohen dropping acid, making out with a fan, crying after an intense show, and even home movies of Cohen not more than 2 or 3.  Palmer calls it "an impression" of the tour, and what an impression it makes.  This is warts and all, a tour at times on the ropes, dealing with crappy sound gear, a near-riot in Israel, and a highly emotional singer who is contemplating quitting touring and music all together.  It's probably pretty close to what every big-name rock tour was like in those days, a barely-contained chaos.

Amidst this swirling existence, came the beautiful music each night, which thankfully Palmer kept at the heart of the film.  From powerful segments to full performances, the intensity of the performances matches the friction of the rest of the film.  The beauty of So Long, Marianne, Suzanne, Sisters Of Mercy and Famous Blue Raincoat is riveting.  An almost-acoustic tour, Cohen is aiding here by two other guitar players, a stand-up bass, two singers (including a young Jennifer Warnes) and famed producer Bob Johnston (Dylan, Cohen) on organ.  We're treated to an early, quite different version of Chelsea Hotel as well.

There are plenty of cinema verite moments, including nervous women propositioning Cohen, on-stage breakdowns, a stoned and distraught singer trying to cancel the rest of a concert, and plenty of journalist interviews.  In one, Cohen sums up his singing style better than anyone has as yet:  a combination of Montreal chansonnier, a European vocalist, and a synagogue cantor.  This is an essential document for understanding the life and success of Leonard Cohen, and helps explain why a solitary monk's life on Mount Baldy would be so appealing a couple of decades later.
Posted by Bob Mersereau at 7:31 PM