MUSIC REVIEW OF THE DAY: JOAN ARMATRADING ON DVD 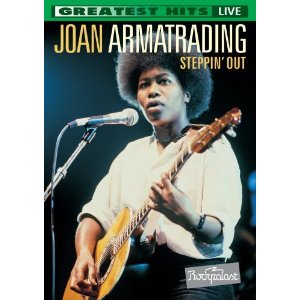 This concert recording is subtitled a greatest hits live, but that's a little misleading.  It's actually a 1980 concert from the ever-excellent Rockpalast TV show from Germany.  These were no-nonsense, strait-ahead concerts, the artists allowed to do what they do, with solid camerawork and lots of quality artists taking part.  Like Austin City Limits DVD's, you know you're going to get a good product, and all that's needed is a good show from the artist.

For this show, we're getting Armatrading at a crucial time in her career, as she was moving from her more folkie material into New Wave-edged rockers.  For this tour she put together a full band, with two guitars, keyboards, sax, and the redoubtable Richie Hayward on drums, in between the old and new versions of Little Feat.  Softer favourites such as Willow, Love And Affection and Down To Zero still make the setlist, but the new Joan is on full display when the group brings out material from the then-new Me Myself I album.

This was the stuff that helped break Armatrading into the wider North American market, and for awhile it looked like she might even become as big a concern here as she was in England.  It was her top-selling album in both both England and the U.S.  And while the bite she added to her songwriting was fresh for the times, it hasn't really aged as well as the best of her songwriting.   While I was looking forward to those jagged numbers such as When You Kisses Me, in the end it was Love And Affection that left me warm.
Posted by Bob Mersereau at 2:59 PM