MUSIC REVIEW: LUKE JACKSON - ...AND THEN SOME 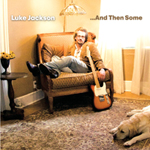 Sometimes you don't have to think too hard about an album to know it's a gem.  Case in point, Luke Jackson's.  I slapped the vinyl on the trusty turntable, and started listening in my usual manner, picking up the particulars, but perhaps missing the big picture a bit.  Meanwhile, my 19-year old walks in, asks "Whatcha listening to?", and in just a couple of seconds, makes up his mind.  "That's really good, huh?"  From the mouths of babes...

Jackson's album is not new.  It came out in 2008, but I missed that particular boat at the time.  Luckily, I met him recently in Toronto through a mutual friend, and he kindly sent along the vinyl.  180-gram vinyl pressings were pretty rare and pricey four years back, but he said he wanted done right, with the best possible sound.  That's because the whole project was that way, from the creation to the listener's ears.  Jackson got a chance to make his dream album, and went top-grade all the way.

Jackson is a transplanted Englishman, with an ear towards glorious pop.  He had struck up a correspondence with a musical hero from Sweden, Magnus Borjeson, who was playing in The Cardigans.  Plans were hatched, and soon Jackson found himself in Sweden, recording with Borjeson, and producer Christoffer Lundquist, formerly of Roxette.  That's hit-making pedigree right there.  But once again, Jackson was thinking big, and when he wanted to add orchestration, he again went to the top.  He sent the works-in-progress to renowned arranger Robert Kirby, the man who put the strings and magic into the seminal recordings of British folk icon Nick Drake, and who had gone on to a special career working with Elvis Costello, John Cale and others.  Kirby quickly accepted, and as it turned out, fell in love with the songs.  Kirby himself enthused, "This is one of the best albums I have ever had the honour to be let loose on".

Reviewers at the time of release agreed.  In a four-star rating, Mojo Magazine called it "one of those albums it's impossible not to love."  Blurt called it one of the most significant discoveries of the year.  From his Toronto base, and all across Europe came knowing accolades.  And the thing about great albums is they don't go out of style.  Four years on, it may be my first listen, but I love what the others heard then.  Whether it's the full-on pop explosion of upbeat numbers such as Come Tomorrow and Goodbye London, or the gentle and rich melodies of the orchestrated numbers such as A Little Voice and All I Can Do, Jackson's made a record, yes, a record, that lights up our senses.  There's fun and joy in places, nostalgia and melancholy, truths and even beauty.

While many of us have been getting used to vinyl again, or discovering it for the first time, ...And Then Some reminds me of how albums used to feel.  The 20-minute sides seem to rush through, not nearly enough, making you leap to the table to flip it over.  Unlike CD's, or downloads, this leaves me wanting more, wanting to play it again, not clicking buttons to find something else.  For pop-rock fans who love hooks, highs, and richness, with a flow between bright rockers and sweet softness, this should remind you of the high you got when you first tore off the shrink-wrap from your favourite albums.

Do yourself a favour and order yourself a Christmas present: orders@popsiclerecordings.com or go to http://www.indiespinzone.com/popsicle.html
Posted by Bob Mersereau at 10:21 PM