MUSIC REVIEW OF THE DAY: DAVID GOGO - CHRISTMAS WITH THE BLUES 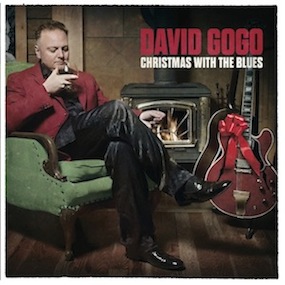 Some people make Christmas albums just for fun, because they like the songs and season.  Others do it, sadly, because there's always a market.  Some want to rise to the heights of the best, say Bing Crosby or Phil Spector's Christmas album.  For veteran axeman Gogo, he saw it as a challenge.  At first, he admits he didn't think much of the idea, but then warmed to the idea of finding a bunch of great blues songs in the spirit.  Also, as he'd never made a pure blues album, it seemed a good opportunity to stretch that way.

Putting together a dream team of his favourite West Coast players, Gogo went deep into the vaults for blues numbers both well-known and obscure.  Plus he added a couple of his originals to truly make it a challenge.  What you get is a classic blues album, Christmas or not.  There are stinging leads, as he bends into the cuts.  Also featuring are veteran piano man David Vest, providing the Charles Brown licks, and the up-and-coming harp player Shawn Hall, who's been dazzling the blues community with his new band The Harpoonist & The Axe Murderer.

Gogo draws on his own life for Let's Get A Real Tree.  He actually does live on a Christmas tree farm, as he says in the spoken word intro.  From there, it's an admission that despite his left-coast P.C. leanings, from recycling to keeping the toilet seat down, he has to have the real deal instead of the more environmentally-friendly reusable decoration:  "Don't be a hippie, let's get a real tree."  The other original takes him down south for some gumbo instead of turkey, on the funky Christmas On The Bayou.  As for the covers, there's a nice take on Brown's annual favourite Please Come Home For Christmas, far more bluesy than the bland Eagles version.  Things really rock on the Leiber/Stoller number for Elvis, Santa Claus Is Back In Town.  This one's for Gogo to show off his string style, playing killer solos between every line, and then scorching his way through twelve bars in the middle.  Hall gets to show off his tricks on the version of Little Drummer Boy, certainly the first time it's become a blues harp instrumental.

Of all the various genres, I think I like blues Christmas albums the best.  Every year a couple come out that join my collection of favourite holiday albums, and this one joins that elite club for 2012.
Posted by Bob Mersereau at 7:26 PM