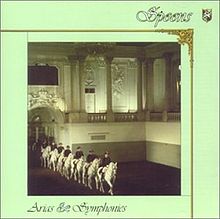 The Burlington, Ontario band's first album, 1981's Stick Figure Neighbourhood, was a breakthrough, but the followup made them rare Canadian stars from the New Wave world.  Arias & Symphonies is a rare gem from that time, a synth album that rocked, danced, and had good to great tunes.  Now 30, it's nice to see classic Canadiana getting the deluxe anniversary treatment usually reserved for international star CD's.

In fact, the album did get some international respect, and certainly strong reviews in the U.S. and Europe.  Here was a troupe that could hold its own in the synth boom, and a degree catchier than albums of the day from OMD and Simple Minds, groups that had yet figured out how to bring in enough beats and hooks to fully integrate the keyboards and drum machines.  The Spoons were a more complete band, with Gord Deppe handling guitar and vocals, Sandy Horne bass and some singing, Derrick Ross providing both real and programmed beats, and Rob Preuss playing all those swoops.  So you'd have a track like South American Vacation which opens with a drum machine, a synth keyboard joining in, and then things get going with guitar and bass turning it into a rock song.  Deppe had just the right kind of slightly-worldly voice that made it all modern.

A good reason the album sounds so sparkling today is the production of John Punter, a vet of Roxy Music and Japan, no stranger to taking cutting-edge sounds and finding that bit of Top 40 in them.  That's what happened with Nova Heart, still arguably the group's best-loved number.  It was groundbreaking in its time, getting what would soon to be called alternative music on radio across Canada, enough to land them a gold album.  Remember, this was at a time when The Police couldn't get played on some squarer stations.

I won't lie, like most early 80's synth music, Arias is dated in lots of places.  But when Deppe's guitar solo rips apart A Girl In Two Pieces, and then he starts off Walk The Plank with some angular, metallic riffs, it proves this is a lot more interesting than most of the peer music from then.  The bonus cuts included here make that even more obvious, with a six-song live set proving they were far more than a studio group, and a new mix of Nova Heart showing it's still perfect for club nights.  Happy B-day Spoons.
Posted by Bob Mersereau at 8:24 PM