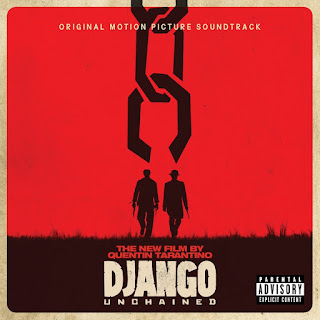 Movie-making kinda got me down a few years back, about the time everything switched to superheroes and major action films, and it became hard to find anything worth a fifty dollar night at the theatre.  Yes, there are still some good ones if you look hard, but I no longer follow the new releases with any great interest.  I say this only to explain that I don't know where Quentin Tarantino rates these days.  I haven't seen the reviews for this latest film, except that my kid liked it a lot.  That means there's a good chance I will as well.

I can tell you that Tarantino is one of great soundtrack makers.  He's actually created a genre of his own; he's not a composer but a collector and compiler, and what he does is strip-mine from all his favourite sources and influences.  The music is as much an influence on the film as the story is, and it's hard to say when it entered into his thoughts, and if it changed the direction of the script, or the mood of a scene.  That's how strongly music figures in his concept of films.

Tarantino's knowledge of soundtrack music is formidable, and he has a great sense of the sound of certain songs.  Think of his previous use of surf music, instrumental rock, Mexican sounds, vintage hits, you name it.  He seems to love something from most genres, and has an ability to mix seemingly disparate sources and have them blend into one film.  That's precisely what you get with this latest, Django Unchained.  Set in the 1800's, it pulses with modern hip-hop, Italian spaghetti Western music, soul, and a Jim Croce song.  Several of the cuts come from other movies, where they hit the obsessive Tarantino hard.  He recycles Morricone four times, two of them from the film Two Mules For Sister Sara.  He commissioned new songs, and grand ones, from John Legend, and a gem called Freedom by Anthony Hamilton and Elayna Boynton.  There's even a brand-new mash-up of James Brown's The Payback (originally a soundtrack song, natch) and 2Pac's Untouchable.

Seriously, this guy is on fire with ideas.  There are few songs here I would normally play in any context, but when they are joined together on this collection, it's magic.  The only complaint I have is the now-overused tactic of taking bits of dialogue out of the film and putting them between songs.  They mean nothing if you haven't memorized the film, and I'm grooving on the tunes here.
Posted by Bob Mersereau at 10:25 PM