MUSIC REVIEW OF THE DAY: REID JAMIESON - SONGS FOR A WINTER'S NIGHT 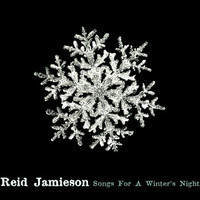 Missing that perfect new Christmas album this year?  The one you play over and over again, trimming the tree, the one you can't wait to  play when friends and family come over?  Look no further, I've got it.  It is, of course, the grand reunion of John Travolta and Olivia Newton-John...  Nah, I'm kidding.  Don't go there.  Instead, check out B.C.'s Reid Jamieson.  His holiday offering is called Songs For A Winter's Night, after the beloved Gordon Lightfoot song, covered here.  It's a collection of some well-known, but surprising choices, and a few of his own originals.

Jamieson is finishing up a month of shows where he was once again the featured musical guest on Stuart MacLean's Vinyl Cafe tour, helping bring the Christmas spirit to folks from Toronto to Vancouver.  The  magic of his new collection is in the very different cover versions chosen, certainly not the usual set.  The theme is really more about winter and the season than Santa, and that opened up the songbook for some gems.  Bruce Cockburn's Coldest Night Of The Year fits for sure, as does Gene MacLellan's Snowbird.  Another smart move is the old classic, Canadian Sunset, popularized by the late Andy Williams, with its classic soft-jazz feel.  You might remember the song Winter Time, on Steve Miller's huge hit album Book Of Dreams, a completely different sound than you'd normally hear on a seasonal disc, with its quiet, atmospheric mood.  Originally a guitar-overdub piece, Jamieson makes it more of a relaxed ballad, bringing out the sweet melody.

It's his treatments that draw you in.  Recorded at his home studio, the album has a warm, personal feel, with Jamieson's calming, emotive vocals shining.  The best, and bravest recasting is found on Band Aid's Do They Know It's Christmas.  We've heard it a thousand times, but not like this, stripped of the bombastic gang approach, made mellow, so that we can focus on the lyric, which actually has the power of a strong protest song.  The job done on Tori Amos's Winter is strong too, and you'd certainly not recognize it from his acoustic reading.

The originals are in the same mood, and all are good additions.  Written with his wife and musical partner Carolyn Victoria Mill, who sings, plays, helped produce and chose the tracks, Sentimental Song opens the disc and sets the tone with its heart-warming melody and sweet-but-sad lyrics about memories of mom during the season.  Songs For  A Winter's Night accomplishes the three important goals for a grand Christmas album.  Everybody will like hearing it in your home, you'll like listening to it when you're alone, and you'll want to pull it back out next year.
Posted by Bob Mersereau at 11:22 AM