MUSIC REVIEW OF THE DAY: THE JAM - THE GIFT DELUXE EDITION 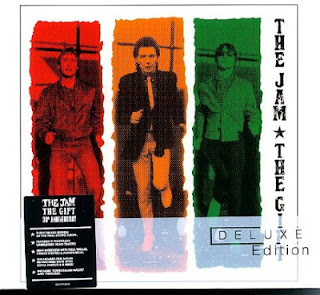 It's pretty rare when the bonus tracks are better than the album on a deluxe version, especially when the album is pretty good, too.  The Jam were big believers in the old-school idea of singles, and they liked issuing 45 RPM and 12-inch tracks that weren't on albums proper.  And, they put a lot of work into the b-sides, they didn't just toss on throwaways.  So when you get The Gift, plus all the A and B-sides, and then a whole pile of demos, this is indeed one deluxe package, made much better than the original album.  Single tracks  here include the excellent The Bitterest Pill, and the group's swansong, Beat Surrender.

This was the last Jam album, as Paul Weller famously pulled the plug on the group he'd lead since he was 14, at the height of their success.  He was tired of it, tired of rock music, and was moving into sophisticated soul.  A much smoother and bigger sound is featured here, along with plenty of horns, and you can follow along on this path with the nine demos presented here.  There's also some of the sleek, Euro-pop sounds that would move to the forefront on his next project, the anti-rock Style Council.  Deeply influenced by clubs and classic soul at the time, Weller even had the group try on some cover versions as b-sides.  Best of them is a take on Curtis Mayfield's Move On Up, with a falsetto he would use on much of his own music.  War, the Edwin Starr hit, was less successful, not gritty enough for such a major message song.  But it's great to have these studio versions right alongside the originals, showing where the influence came from.

It's an interesting moment in time for Weller, shifting away from the crunchy post-punk of The Jam.  Honestly, I always found The Style Council way too precious and high-concept, right down to the tailored image and clothes they presented.  Here, Weller still had the heavy beat of The Jam to consider and serve, and the soul sounds worked much better.  As deluxe editions go, this is one of the best ones I've heard, with none of the additional cuts spread over the two discs filler for completists.
Posted by Bob Mersereau at 8:05 PM