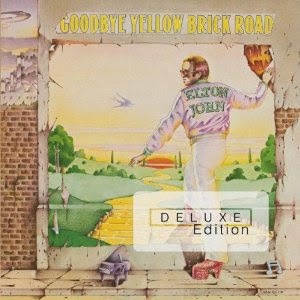 It's Elton's best-known album, although not necessarily his best. But biggest, ya, so it deserves a nice big super deluxe edition. This one comes crammed with four cd's and one dvd, plus a 100-page hardcover book, quality packaging for sure. As always with Elton, it's as much style as substance, and the book is rather short on actual words but includes a ton of pictures of various stage outfits of the time, including close-ups of boots and glasses. He's famously forthright about his past these days, so why not include a bit more of his interview?


Onto the music: You know the album, I assume. At least you'll know the hits, including the title track, Bennie & the Jets, and Candle In The Wind. This was a cornerstone album of my early collection, and I poured over every bit of it, and know it inside and out. I've always felt there are exceptional songs here, including the opener Funeral For A Friend/Love Lies Bleeding epic, and the closer, the beautiful Harmony. Then there's the pounder Your Sister Can't Twist, which sets up a one-two punch with Saturday Night's Alright For Fighting.


If there's a fault here, it's not with Elton, who pours a whole lot of great melodies, rockin' performances and heart-tugging ballads into the double album. You have to point the finger at Bernie Taupin, capable of excellent lyrics and complete howlers in the space of one record, and even one song. As much as I love the sound of Goodbye Yellow Brick Road, I cringe every time Elton sings "hunting the horny back toad." Roy Rogers is a fine story about escapism via Western TV shows, "Roy and Trigger have just hit the hillside, while the wife and the kids are in bed." But then there's the near racist Jamaica Jerk-Off, and the equally offensive Dirty Little Girl. Even with my nostalgia, I can also remember the embarrassment I felt at some of these songs at the time. You know the old cliche, it would have made a better single album.


As for the super deluxe additions, they are plentiful, but spotty as well. Nothing wrong with the two discs that offer up a complete two-hour show from Christmas of 1973. Since it's England, it's a little more subdued than U.S. audiences of the day, but Crocodile Rock and Honky Cat get them going, and some choice album cuts such as Elderberry Wine make this a more interest live set than his more recent, hit-smothered live discs. The other bonus disc has the most problems. We get the same b-sides and non-album tracks that have been included on previous reissues, with nothing new found. Demos or radio shows, anything would have been nice. There's also this weird nine-song section called Goodbye Yellow Brick Road Revisited, which sees new artists doing covers in tribute. That in itself isn't strange, but the choices and versions suck. Country acts The Band Perry, The Zac Brown Band, what's up with that? Fall Out Boy ruins Saturday Night. Only retro-rocker Imelda May really shines, on Your Sister Can't Twist.


The DVD is okay, if you are into 70's TV production. This 45-minute film was done at the same time as the album was coming out, and features a fawning host trying to sound like he's being serious about the whole thing, but is really just throwing softballs at Elton. It features awful set-up visuals such as the whole band walking through the woods wearing identical long-sleeve t-shirts advertising Elton's new record company, Rocket. At the same time, there's some great concert footage, which unfortunately has been chopped to pieces in the original edit. It's really just a curiosity, okay for one viewing.


The Super Deluxe version is certainly a good price, in the mid-$60's, but the thinner Deluxe edition just has the extra disc with the covers and the non-rare b-sides. Wish it had the live show. Like Elton himself, Goodbye Yellow Brick Road is more famous than good. But again, like Elton, when it's good, it is very good.
Posted by Bob Mersereau at 8:37 PM