MUSIC REVIEW OF THE DAY: ICON 2 - THE BEST OF BLUE NOTE 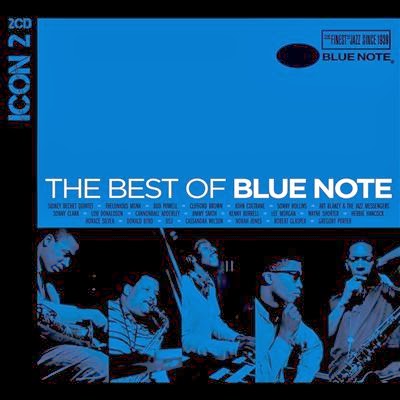 The venerable Blue Note label is one of the most appreciated in jazz circles, with a roster that has included many of the greats over the years.  Still going strong, it now has diversified into all sorts of sounds, but back in the day, it was pure cool, and released many of the landmark albums of the 50's and 60's.  Miles and Monk were there for a time, and in their wake the hard bop sound became the house specialty, with such names as Bud Powell, Art Blakeley, Sonny Clark, Lou Donaldson, Horace Silver and Sonny Rollins all in the discography.

When Universal Music snapped up much of the EMI catalogue, it got Blue Note, and has been actively repackaging the works in this, the label's 75th anniversary.  That includes this nicely-priced double disc, part of the Icon series.  Short on notes but long on music, it's a diverse collection that includes all the above names, and some key tracks, although none of the cliches of jazz samplers.  Davis is featured as a guest on Cannonball Adderley's Somethin' Else, blowing great solos, while Monk is featured in his own performance of 'Round About Midnight, which Davis later claimed as his signature song.  Coltrane blows Blue Train, and Jimmy Smith, master of the B-3, delivers his hit Back At The Chicken Shack.

Disc two takes us into the modern era, with the 60's represented by Herbie Hancock, Wayne Shorter and Kenny Burrell.  You can also catch Horace Silver's influential Song For My Father, and hear where Steely Dan ripped off the bass-piano motive for Rikki Don't Lose That Number.  After being sold in 1965 and passed around in corporate deals, the label was revived in the 80's, and still has strong jazz  roots, as heard here from Cassandra Wilson.  But you'll also find hip-hop, and label saviour Norah Jones too, covering Hank Williams' Cold Cold Heart.  These days, Blue Note releases everything from Rosanne Cash to Petty/Heartbreakers keyboardist Benmont Tench, but the glory days still give the name prestige.
Posted by Bob Mersereau at 8:56 PM