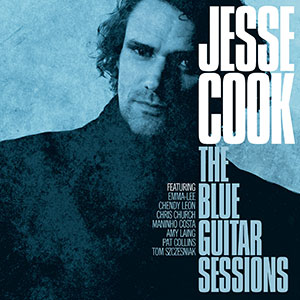 Jesse Cook is kicking off the Canadian leg of his world tour for his latest release, The Blue Guitar Sessions, opening up in New Brunswick this week.  The first three dates are in Saint John at the Imperial Theatre, Wednesday the 14th, Moncton at the Capitol on Thursday, and Fredericton at The Playhouse on Friday the 16th.  With him is special guest Emma-Lee, who's fine Backseat Heroine came out earlier this year.  It's a good partnership for the pair;  Emma-Lee was a guest vocalist on the Blue Guitar Sessions disc, and she confirms she'll get to reprise her singing role each night on the tour, doing that spooky Screamin' Jay Hawkins hit, I Put A Spell On You.

Emma-Lee says she's excited to get a chance to finally sing on the road with Cook: "This will be the first of any of the shows on the tour for me.  Earlier this year we shot a TV show for PBS, but this is the first time I'll be on tour with him."  Cook often has a star or two show up on his discs to sing a track, as he's not a vocalist himself.  In the past, guests have included Holly Cole, Danny Wilde and Melissa McClelland.  At first, she says, she wasn't a guest, she was just helping out:  "He started out by him asking me to demo some songs for his new album, and then he ended up asking me to perform on the disc too.  It was an interesting challenge for me, my new album branched out from jazz, and I had sung mostly jazz on the first album, but had added much more to the new one.  So I get to dip back into jazz with this."

Backseat Heroine does indeed break from jazz, with a broad range of pop, even louder rock, along with a few ballads to showcase her strong ballads.  For Emma-Lee, the decision to do more than the jazz numbers came from necessity, spending so much time on the road:  "Even though I write my songs, I'm mostly a singer. That's what I do all the time, night after night.  After i toured the first record, which was more jazzy pop and had some ballads on it, I realized I had a lot more fun doing more uptempo things. And even though the album you record is important, most of the work you do is done every night on tour, and I wanted to be excited when I look down at the set list each night."

Cook's album is quite a radical departure for him.  He's left much of his usual rumba flamenco flair behind, opting instead for an intimate, less adorned series of songs.  Inspired by the personal qualities that made Adele's 21 album so striking, he deliberately sought a simplicity that wasn't in his work before.  The result is more reflective series of songs that let the listener hear the emotion in the playing, leaving the fast and the furious licks out of the picture.  The Latin mood is still largely there, but we're drawn into the delicacy and musicality of the playing and melodies.  Mood is everything here, and his usual stalwart players are also asked to concentrate on the depth of the sounds, rather than the volume.  It's an interesting side to Cook, as he puts a spell on us.

You can find all the tour info at www.jessecook.com
Posted by Bob Mersereau at 8:22 PM