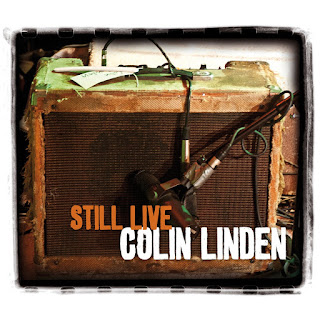 What more do you want from Colin Linden?  He's a member of the beloved roots group Blackie & the Rodeo Kings, the producer of dozens of the best-sounding albums around (Bruce Cockburn, Colin James, etc.), and super-producer T-Bone "O Brother Where Art Thou?" Burnett's right-hand man on that and other projects.  Somehow, he still manages to continue a successful, Juno-winning solo career in there as well.  Okay, so it did take him two years to get this concert recording released, but he probably couldn't find the time to listen to it.

Linden leads as tight a combo as can be found, with fellow Canucks John Dymond on bass, and Gary Craig on drums, and for this date, an actual legend on keys, the Rock and Roll Hall of Fame member Spooner Oldham (Neil Young, Bob Dylan).  Oldham's presence tells you all you need to know about Linden's rep as a player, and his heavyweight connections south of the border.  Of course, that's backed up by the recordings here.

Listening through, it struck me about the third time through that these songs, recorded in just one night at a club in Nashville, aren't just great versions.  They are pretty much perfect takes, flawless, worthy of putting on a studio album.  Whether it's his electric slide playing, or acoustic picking, the guy is note-perfect.  Plus, it's never just rhythm chords, its complicated fills, playing around the other musicians and his own vocals, stuff only the best can do.  And then, THEN...there are the solos.  Linden's not about flash, he's about tone, groove, and serving the tempo and melody of the song.  You never get the feeling he's trying to impress you, but instead he's trying to make the song as good as it can be.

We get some Linden favourites here, including the must-play Remedy, the song he wrote for The Band, and a couple of fine tribute tunes from his 2008 From The Water disc.  John Lennon In New Orleans is a nifty, fictional tale of what might have happened if Lennon showed up for a lost weekend unrecognized in the Crescent City.  Smoke 'Em All is for his friend Richard Bell, the Toronto keyboard player who worked with Ronnie Hawkins, Janis Joplin, and was with Blackie when he died in 2007.  The power of his lyric comes across even better in the live version, with the great lines "Left hand like thunder right hand of gold/Tough like Chuvalo with Ray Charles soul".  The Americans probably didn't get the reference to the Canadian boxer, but its perfect for Bell and Linden, two other greats.
Posted by Bob Mersereau at 3:34 PM