MUSIC REVIEW OF THE DAY: ELVIS - AS RECORDED AT MADISON SQUARE GARDEN 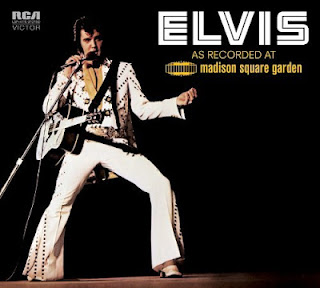 The King is alive!  Well, Elvis has never left us, thanks to all the reissues.  And really, nobody does them better.  Elvis albums were notoriously spotty and tossed out with no regard to a legacy, and that's certainly what's being done in the on-going Legacy reissues.  This time, the 1972 Madison Square Gardens concert is fixed up in a decent package.  Or rather, concerts, as this was a 3-day run in the prestigious venue.  Originally, there was the big-selling As Recorded At Madison Square Garden, released back in the day.  Then an afternoon matinee came out in 1977.  Both the complete shows are now included here in this two-disc set.

Yes, the set list is pretty similar, but there is a different energy to the shows.  The evening set is more manic, and a bit shorter.  The afternoon one is more relaxed, and includes a couple of better songs while dropping the ridiculous, overblown version of The Impossible Dream.  Elvis always erred on the side of cheese over class.  And considering the huge amount of classics he had to choose from, it's surprising how much time he spent on covering other people's hits.  The basic show started with numbers that were his latest favourites by others; Proud Mary, Never Been To Spain, Polk Salad Annie.  Finally, he started tossing out the early hits:  Love Me, All Shook Up, Heartbreak Hotel, Don't Be Cruel, Love Me Tender.  A peak is reached with Suspicious Minds, and the band, especially the backing singers, really pour it on for this later hit.  By this time, his version of An American Trilogy had become a major showpiece, but the irony of Mickey Newbury's medley is missing in Elvis' jingoistic interpretation, as he makes The Battle Hymn Of The Republic a bombastic, flag-waving spectacle.

Then it's back to favourite covers, Funny How Time Slips Away, and I Can't Stop Loving You, before he closing it with Can't Help Falling In Love, and off they go.  Just about an hour, and then the famous announcement, "Elvis has left the building."  Yup, they really did say that.

In 1972, Elvis was still a dynamic performer, and there are none of the embarrassing moments here, the rambling chatter to the audience, the karate moves, the insults thrown at band members, crimes that would appear more frequently on further tours.  Playing the Garden was a huge deal, away from the safety of the Vegas strip, under intense media scrutiny.  He pulled it off with showbiz intensity, and it was probably quite a show.  It doesn't quite translate on disc;  the band is going at breakneck pace at times, Elvis' tempo of choice for the oldies.  Again, subtlety wasn't his thing.  But this is a fantastic band who manage it all, with leader and guitar legend James Burton spitting out some great licks when he gets the chance.  Like all things Elvis, this could have been so much better with not too much work, but the talent is still there to hear.
Posted by Bob Mersereau at 7:56 PM