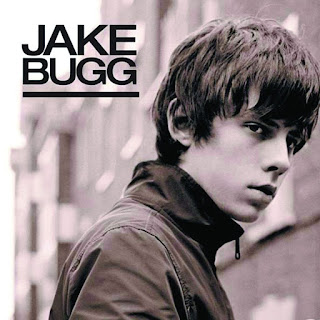 Friggin' kids.  Jake Bugg is 18.  He just had the number one album in England.  And he's not Bieber.  Or Drake.  Or some Britain's Got Talent junior Susan Boyle.  No, bloody Jake's a real rocker, and the album's great.  In fact, I've not heard anything quite like it.  He's invented his own sound, written his own tunes, and somehow completely by-passed the stigma of being under 20.  If I didn't know beforehand, I would never have guessed his age from this mature disc.

What we have here is a guy who is part busker, part old-school rocker, part classic Brit attitude-singer.  Using classic skiffle strumming and a rockabilly beat, Bugg riffs away on opener Lightning Bolt, spitting out words like Buddy Holly on a hangover.  Next comes Two Fingers, a coming-of-age pronouncement, as snotty and confident as a T. Rex hit:  "I hold two fingers up to yesterday, light a cigarette and smoke it all away, I got out, I got out, I'm alive, and I'm here to stay."  It's no wonder he's found a fan in Noel Gallagher, who trumpets his talents, and invited Bugg to open his recent North American dates.

Taste It is another one with the rockabilly groove, short and sharp, with old-fashioned chord changes that somehow sound fresh and exciting in their raw presentation.  Other cuts mix 60's Top 10 with 90's Britpop, Bugg not adverse to making songs touch on all the best of Britain.  The folk sound comes through elsewhere, with it's Donovan strum and Dylan harmonica.  And Country Song could be right from the 1965 folk circuit, just Bugg and his acoustic.  Broken is tender and beautiful, yet another side of this remarkable young man, his heart on the line.  Then it's back to the raucous sound, Trouble Town his most rough-edged Dylan-inspired number.

Meanwhile, ten million other 18-year-olds are in the basement playing the new Halo.  Just sayin'.
Posted by Bob Mersereau at 10:41 PM