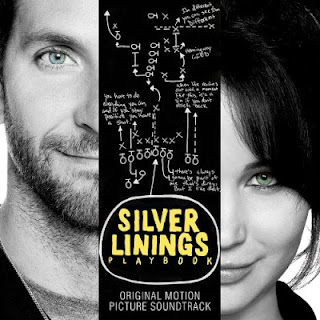 This is the soundtrack to a new, critically-acclaimed film about a man with bipolar disorder, and the woman he meets struggling with her own problems.  The title may be awkward, but the music is first-class, that great mix of old and new, obscure and better-known names.  Hot new group Alabama Shakes are here, with a terrific track, Always Alright, a live and YouTube favourite not on their debut album, making its first available appearance here.  Another major new track is Buffalo, by the hot British act Alt-J, who recently grabbed the U.K.'s Mercury Prize for their first album.  Here, they are backed by the female vocal trio Mountain Man, most recently Feist's backing vocalists on tour.  It's a charming, light-folk influenced number, with lots of mystery and modern effects behind.

Often the trick to a good soundtrack is staying away from overused cuts, and going deeper into the catalogues of great musicians for forgotten gems.  The only really well-known one here is Stevie Wonder's Ma Cherie Amour, which is certainly not his most played cut at least.  But elsewhere, there are lots of surprises.  Most today will only know Dave Brubeck for Take Five, but here we get two more excellent numbers from his Quartet, Unsquare Dance (excellent title, eh?), and Maria.  Same goes for Les Paul and Mary Ford, who usually only get How High The Moon heard.  The Moon Of Manakoora is another example of the duo's great chemistry, and Paul's unbelievable early production inventions.  And obscure Bob Dylan, is it possible?  Well, only the bigger fans have heard the version of Girl From The North Country that he did as a duet with Johnny Cash, and included on the Nashville Skyline album.

There are several excellent choices by surprising names.  Eagles of Death Metal, Josh Homme's humourously-named other band, do the best one, Now I'm A Fool, an acoustic-driven number from 2008 that's more Eagles than Death Metal.  Ambrosia Parsley & the Elegant Too contribute Goodnight Moon, kinda like latter-day Leonard Cohen stuff, with more zip.  And CrabCorps, so under-the-radar they don't even have a Wikipedia entry (that's saying something - even I have a Wikipedia bio, somehow), do a too-cool, slowed-down, serious version of The Monster Mash.  Really.  Anyway, this was a really fine listen, from start to finish, and if you have more than two or three of these songs in your collection already, well, you're a better record collector than most.
Posted by Bob Mersereau at 9:29 PM