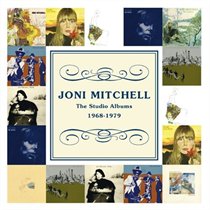 Help me, I think I'm falling in love again.  This ten-disc box compiling all of Mitchell's original studio albums in the 60's and 70's has me reliving some great moments, and I don't just mean Blue.  In fact, I've listened to that too much to get blown away again.  While it's arguably her best, that's not a sure thing, and some great leaps can be found over the course of eleven years and ten albums.  It's tough to think of anyone who did so much experimentation, and changed styles so radically.  That's if you compare 68's folk disc Song To A Seagull to 79's jazz album Mingus.  It's more fun to follow the development from disc to disc, where it all makes sense.

Some of these albums are just plain terrific art.  Let's put Blue, Court And Spark and Hejira down as the ones you can't argue with.  Ladies Of the Canyon comes close.  Three more fascinating, transitional ones are For The Roses, The Hissing of Summer Lawns, and Don Juan's Reckless Daughter.  Song To A Seagull has its moments, but not many, and is helplessly dated in coffee shop times.  Clouds is developmental, a mark above Seagull but not there yet.  Mingus is a great experiment, but a challenging listen.

I don't know if I even need to talk about Blue.  Has so much ever been said with just a piano, voice and dulcimer?  Not a week goes by without some very good friend of mine on Facebook posts "I could drink a case of you darling and still be on my feet" as their status.  In about two weeks, we'll start hearing any of dozens of versions River in the malls:  "It's coming on Christmas....".  Her voice soars to notes unheard in songs of the time, and she moves between moments of great joy (Carey), sadness (Little Green), confusion,  deep emotion, and everything in between.  It's an album that changes your life when you hear it.  'Nuff said.

It's Court And Spark that always makes me feel best.  The one-two punch of Help Me and Free Man In Paris, Mitchell proving how she could write brilliant songs and still make them pop hits.  Fully integrating the jazz-rock L.A. Express into her songs, this may be her most commercial album, but it is also rich with tremendous melodies, and fantastic song settings.  Whether we're sitting in the lounge of the Empire Hotel, or feeling out of place at people's parties, Mitchell takes us away to grand spots.

Then there's Hejira, which never fails to amaze me, although I don't go there that often, not sure why.  Coyote is yet another of her fascinating characters, but the stunner for me is Amelia, an epic for sure, so melancholy, as she examines the pain that goes along with flying to great heights.  Likewise the dialogue in Song For Sharon; Mitchell may reveal more about herself in this album than in the previous, confessional folk ones.

What's good about having the box, having all the albums, is that you can approach each one knowing what come before, and where she is going next.  For The Roses's individual songs, other than the obvious You Turn Me On, I'm A Radio, are not as accessible as Blue or Court And Spark.  But map the progress, as she starts to incorporate the horn and woodwind blend into the arrangements, and starts making her voice a powerful backing instrument as well.  The dulcimer is out, she is learning fantastic chords, and it's going to come together quickly, just not quite there for Roses.  The demands of The Hissing Of Summer Lawns similarly pay off in Hejira, as we know better understand how she has moved past the constraints of three minute songs.

There's no special features, ephemera, or bonus tracks here, not a boxed set extra at all, just slim-sleeved reproductions of the original album art.  This isn't for the collector, it's for the fan, and for those who want to discover the parts they've missed.  That's kept the cost way down, in the $65 dollar range the places I checked.  Value for money?  Oh, no argument here.
Posted by Bob Mersereau at 8:24 PM