MUSIC REVIEW OF THE DAY: RE-MACHINED A TRIBUTE TO DEEP PURPLE'S MACHINE HEAD 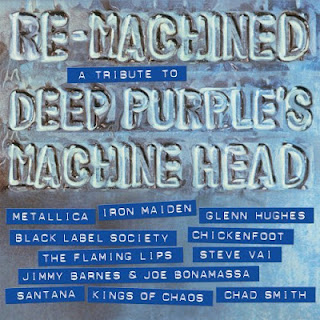 You know what's a great song?  Smoke On The Water.  Oh, you knew that?  And you're...you're sick of it?  Sorry, guess I'm a little behind the times.  Not being a loud fan, I didn't get burned out on this particular classic album.  And now that there's so many louder groups, it's kinda more classic rock anyway, so it's like comfy old furniture.  Perfectly fitting for a tribute disc, too.

The great thing about these Purple songs is that they are so well-constructed, they can stand up to the tribute versions, as long as you don't mess with them too much.  There's not much fooling around hear, except one notable exception:  That's what you get when you invite The Flaming Lips to the party, especially to do the iconic Smoke.  Wayne Coyne speaks the lines instead of sings them, and that's just the start.  Don't freak though; it's the second version on the disc.  Carlos Santana and Jacoby Shaddix (Papa Roach) handle it well as the opener on the disc, Carlos particularly excited and, umm, smokin'.  Roach sounds the part.

Chickenfoot handle Highway Star, another classic, in a live version, with the guitars at full blast, but they don't change much.  Instead, a bonus version of the cut with Steve Vai, Chad Smith (Chili Peppers) and Glenn Hughes (latter versions of Purple) is included, and much more satisfying, Vai especially fiery, no surprise.  Elsewhere, Hughes and Smith contribute a decent version of the lesser cut, Maybe I'm A Leo.  Other big names aren't so successful;  Metallica's take on the b-side When A Blind Man Cries is lifeless, perhaps more to do with the inferior track.  But the ballyhooed super group of the event, called Kings of Chaos, come off great.  The quartet features Matt Sorum, Joe Elliot, Steve Stevens and Duff McKagan, and they make a grand noise on Never Before.  As for the other big album track, Space Truckin', it's left to stalwarts Iron Maiden, and they wisely just grind through it.

Perhaps the best guitar solos on the disc (this is a metal album, of course) come from Joe Bonamassa, who teams up with Jimmy Barnes for Lazy, and Joe goes for it.  That's really the thing to do;  don't mess with success, just do more of it.  Interestingly, I'd like to hear the original album again.  That Smoke On The Water, that's a pretty good song, you know?
Posted by Bob Mersereau at 9:24 PM