MUSIC REVIEW OF THE DAY: BLACKIE & THE RODEO KINGS - KING OF THIS TOWN 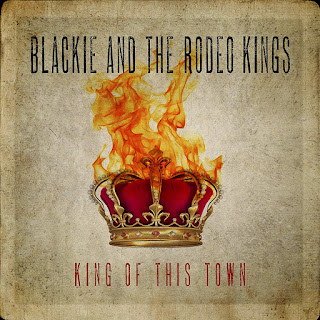 It really is the best of both worlds for the members of Blackie & the Rodeo Kings, and if you don't know about their status as roots giants in Canada, you aren't paying attention. Colin Linden grabbed a Grammy win for Best Americana album on the weekend for producing Keb' Mo's latest, Oklahoma. Just today (Tuesday), Tom Wilson was honoured with a Juno nomination for his latest release under his Lee Harvey Osmond persona, Mohawk. Plus he's a best-selling author. And if there was any justice, Stephen Fearing would have been nominated as well for his excellent The Unconquerable Past. But he's won before of course.

With all this success (and that's just scratching the surface of their many projects), that they still manage to drop it all every couple of years and put out a new Blackie album is a testament to the bond they've developed. The band is that rare example of three distinct personalities that manage to blend as well as highlight different genres; Linden the blues, Fearing for folk, Wilson the eccentric rocker, all adding up to roots music.

King Of This Town features some of their best group compositions. "North Star" is a dreamy harmony ballad, that lonesome search for the woman with the North Star in her eyes, a nod to Canada certainly. So is "Cold 100," a great driving song again featuring all three singing, 100 miles of road in the winter. Each member gets their own spotlight tracks as well, Linden on the title cut, his aching tenor always a mark of authenticity. Fearing handles matters of the adult heart, including the sadness in "Walking On Our Grave." Wilson digs back a bit to his Junkhouse days for the groove-rock number "Medicine Hat."

As always, the music sounds great, produced by Linden (who produces Grammy winners, you know), and featuring the redoubtable backing of de facto members John Dymond on bass and Gary Craig on drums. If I was asked to put together a perfect Canadian band, I don't know if I could do better than Blackie.
Posted by Bob Mersereau at 10:07 PM No comments:

MUSIC REVIEW OF THE DAY: JAY AYMAR - YOUR PERFECT MATADOR 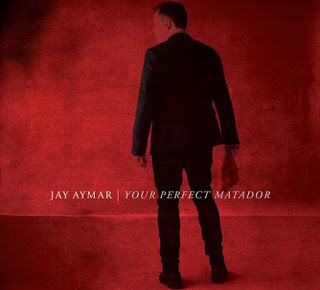 Canadian singer/songwriter Jay Aymar's excellent 2018 album Your Perfect Matador is getting a second wind. New label Fallen Tree Records has picked up the release to add to its small but growing roster of Canadian roots offerings. Hopefully that will mean the record will make it to some new ears, as Aymar's one of the nation's best troubadours, and this is arguably his finest work. In honour of the reissue, here's a reissue of my original review:


The veteran singer-songwriter adds some drama and some muscle to his latest. Desiring a fuller production, Aymar brought on the esteemed Michael Phillip Wojewoda, and the results are exciting. The songs, rich stories in themselves, are beefed up with mysterious guitars, deep drums, strings, and lots of cool vocals. Aymar even delivers some spoken-word parts to heighten the book-on-tape feel. Elsewhere, guest singers Chloe Charles, Alejandra Ribera and Shakura S'aida do what they do very well, standout vocal parts.

Even the acoustic tracks get a boost. The Greatest Story Never Told starts out with Aymar and guitar, always a good thing in itself, but takes off by the second verse. The one-man orchestra, string arranger Drew Jurecka, brings in the atmosphere, and Charles duets, adding a touch of sadness. Us Wild Dogs is another half-spoken number, with barest guitar, but now turned into a campfire Western, with warbled voices joining in. The darker duet with Ribera, Alive In The Shadows, starts like a Leonard Cohen song and builds to a huge climax, with the strings and singers raising in volume in a thrilling conclusion. Then out of nowhere comes a funky groove with a synth and distorted guitar called Always Had You, which might get Aymar kicked out of the folk collective.


I've always felt Aymar was a darn fine singer-songwriter who didn't need to change what he did. That's why this is such a surprise, and a delight. Hearing him stretch so successfully is a reminder that artists are always at their best when they challenge themselves and our expectations.
Posted by Bob Mersereau at 1:42 PM No comments:

MUSIC REVIEW OF THE DAY: LYNN HARRISON - SOMETHING MORE 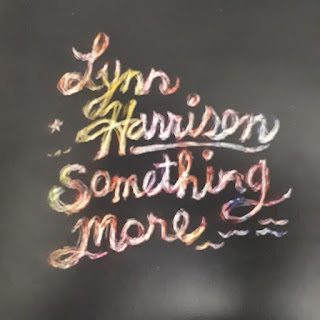 Sounds and styles come and go, but strong songwriting never goes out of style. From Toronto, Harrison's sixth album is shot full of humanity and morality, on a personal level and as a broader response to today's turbulent world. Her music has a distinct calmness, not so much a quiet calm but rather one of strength.

Harrison's vocals reflect those qualities as well, with an effortless and unadorned mellowness. She falls in that folk-pop world that suits thoughtful writers so well, just the lightest electric touches and percussion to add a groove and sweeten the melody. After that, it's time to sit back and find your own moments of strength in the songs that speak best to you. In "Pretty It Up," for those who've wasted too many moments on social media, there's "Scrolling feeds of loneliness, a million shades of gray." For women past their youth, "Waves" offers "Now fire is flowing through me as awareness of the grave ... comes over me in waves." Perhaps the most powerful, is "Protester," about how even the apolitical can be motivated by appalling actions: "'Til I saw what you did Sir, I was not a protester."

For those in Toronto, Harrison launches the album with a show at Hugh's Room Live, 7:30 this Sunday, Jan. 26.
Posted by Bob Mersereau at 11:12 PM No comments:

MUSIC REVIEW OF THE DAY: THE OFFICIAL SOUNDTRACK - PEAKY BLINDERS 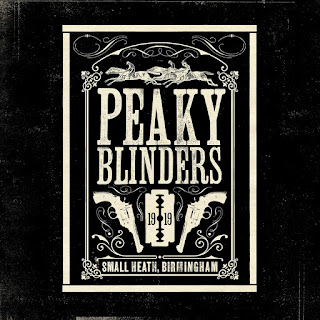 I don't know about you, but I've done nothing since mid-December except binge-watch shows. I'm all caught up on all my favourites, and I must admit it's pretty pathetic when you you look at the calendar to count the days before The Walking Dead starts up again.

I'm now reliving my binge moments through soundtrack CD's. You know a series has a great theme song when you never tire of it, and Nick Cave's "Red Right Hand" was an awesome choice for Peaky Blinders. It was already a great track of course, and nothing says danger and dark thoughts and actions like Cave and the Bad Seeds. So, a perfect match for this British show about particularly nasty gangsters in post-WW 1 England. There's even a version by Cave's equal in gloom, P.J. Harvey.

Having watched all five seasons of the show to this point (there are at least two more coming), I'm surprised there's enough music to fill two CD's of three LP's, but they've done that, and very well. The music matches the show's considerable edge, with selections from The White Stripes, Dan Auerbach, Arctic Monkeys, Joy Division and Black Sabbath among the many notable names. I find the two Radiohead choices ("You And Whose Army?" and "Pyramid Song") particularly poignant, coming as more thoughtful choices instead of the mayhem moments. Cave, being the living embodiment of the show's mood, could have programmed all the music I suppose, and I'm sure the producers have lots more ideas from his catalogue. There are two more featured here, "Breathless," and a rare one, "The Mercy Seat" live from KCRW.

You don't have to be a collector of such folks to appreciate the sounds here, the collection maintains a high quality right through to the end, when Richard Hawley gives a dark take on "Ballad Of A Thin Man," already a pretty mean-spirited Dylan song. Sprinkled through with bits of dialogue from the notorious Shelby family, it is a fun way to experience the show again, while you're desperate for the next season. Stupid January.
Posted by Bob Mersereau at 11:45 AM 1 comment: