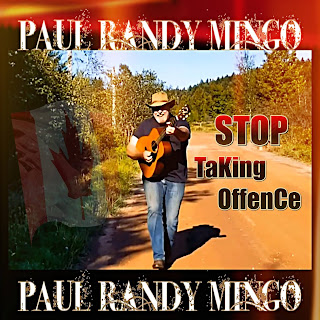 Nova Scotia country-rocker Paul Randy Mingo has been itching to get back to playing, and a couple of weeks back came up with a unique stage, mindful of social distancing. Mingo set up outdoors, on the Port Greville beach, just down from his home along the north shore of Minas Basin. All went grand, says the veteran performer, as a few dozen folks were able to come out, not get too close, and still enjoy a show.
Mingo's been busy on the recording side during the Covid downtime as well, and has just issued his latest, a six-track E.P. It features what he calls an upgrade to his sound, which means a whole lot more instruments on some of the tracks. Opener "Another Round" has a great big, rocking band backing him, with loud guitars, piano fills and huge drums, Waylon on steroids. "You Know What I Mean" is another track with country cahones, an affirmation of Saturday night, drinks with friends and the back roads around Seal Brook.
In just six tracks Mingo shows lots of songwriting range, with "I Loved You Most Of All" a piano ballad with some grand synth-string orchestral touches. "The Way" could have been from your favourite '70's rock band, and the title cut is a honky-tonk reminder to not get so worked up about everything on the internet. Mingo's small-town Nova Scotia is sounding plenty big.
Posted by Bob Mersereau at 9:44 PM 2 comments: 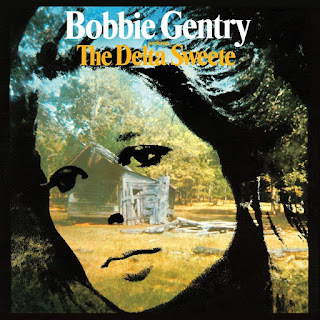 If you missed out on the tremendous 2018 box set of complete Gentry recordings, here's a deluxe version of her 1968 concept disc, a southern suite of country-blues.  This was the followup to her momentous debut, Ode To Billie Joe, and proved she was a formidable talent with lots of ideas. The album was an expansion of her sound, with more electric instruments, more strings, horns, and a series of linked songs. While surrounding herself with high-quality players, such as L.A. session stars James Burton, Hal Blaine, Ray Brown and Earl Palmer, and using arrangements from Jimmie Haskell once again, it was obvious that Gentry was in charge. She had a much greater role than most country performers in the song choices, writing and production, men or women.
Sadly the album didn't catch on as strongly as her debut, partially because of the lack of a hit single, and probably because the idea of a country concept release was a little too ambitious for that audience. It didn't stall her though; within months she was teamed up with Glen Campbell, and forging ahead with a very successful TV career, especially in the U.K. But The Delta Sweete was largely forgotten, until the box set brought it back to many ears.
The album featured songs written by Gentry that looked back on her Mississippi upbringing, moody and warm. While there was a celebration of those days and people, at the same time the lyrics were tinged with sadness. The effect of her haunting voice, nylon-string acoustic guitar (yes, she played on all her records) and Haskell's unique arrangements brought that same sense of melancholy to the album that featured so strongly in the hit "Ode To Billie Joe." More positive were the cover versions, Gentry choosing numbers which reflected the connection between country and the blues in the south: "Big Boss Man," "Parchman Farm" and "Tobacco Road."
This set features stereo and mono mixes of the album, the stereo a brand-new mix from the original masters, a welcome upgrade over the less dynamic 1968 mix. There are also a couple of tracks that weren't on the box set, including a demo of a song that didn't make the final album, "The Way I Do." There are also a series of demos that were on the box, best of all her version of Nina Simone's hit "Feelin' Good." The vinyl version includes the new stereo mix on the first album, with all ten bonus tracks on the second.
Posted by Bob Mersereau at 4:28 PM No comments: 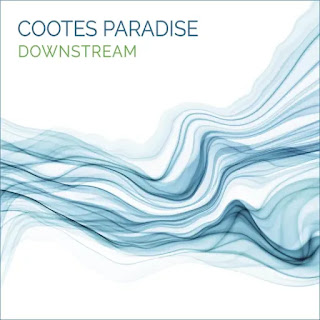 Hamilton-area blues and soul vets make up this group, nominated for a Maple Blues Award for their debut in 2017. This follow-up was delayed by the death of producer Nick Blagona before he finished the album, but his superior audio touch is all over the half-hour, seven-track disc. It's a worthy project to cap the famed engineer's career, which saw him as the in-house wiz at Le Studio for luminaries such as Cat Stevens, The Bee Gees and Deep Purple, and producer for The Tea Party, Kim Mitchell and April Wine, among hundreds of projects.
Downstream is a grittier set than the band's self-titled debut, as the band takes full advantage of its wide range of experience, and having two strong singers on board. Both Wayne Krawchuk and Sue Leonard take their own leads, and team up for some strong duets, including the cooking closer "Until The Rain Stops," a heavy and funky blues. The other duet, a cover of Van Morrison's "You Gotta Make It Through The World," hints at gospel, and lets the pair sing with gusto.
"Knack For That" and "Scratching Post" both feature inventive arrangements, touches that take each song past the usual blues workouts. Surprising bits and pieces pop up at just the right times, such as Mark Volkov's brief flute line and Lily Sazz's keys in the latter tune. As for songwriting, "Meant For Something More" would have made a great '70's soul single, when soul singles were great.
Best of all (I didn't think of this until this very second, and I've been listening to this album for a couple of weeks), I can't think of another band, at least in the roots/adult world, with three men and three women, counting in Amy Di Nino on drums and Ian Taylor on bass. Parity.
Posted by Bob Mersereau at 9:31 PM 1 comment: