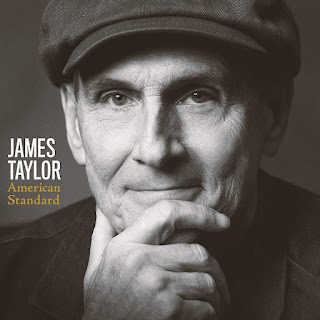 James Taylor knows a few things about American standards. He's written a few of them after all, at least from his generation. Here he goes back a few decades, presenting some of the songs he grew up with, his early inspirations. We've seen this before of course, from Ronstadt to Buble to Rod Stewart, but Taylor's take is completely his own, and puts his stamp on all of it.

When Taylor does a cover version, he takes over that song. It's been that way with his pop hits. His versions of "Mockingbird" and "How Sweet It Is" could be considered the definitive ones, coming to mind ahead of the originals by Charles and Inez Foxx and Marvin Gaye, respectively. That's the case with everything here, even the most familiar of standards, as he makes them unmistakably James Taylor songs. Much of it is his voice of course, that leisurely, laid-back style he's always used, truly now a trusted old friend to all of us. But he also bravely adapts each piece, turning them all into something surprising and new. Even a piece of theatre fluff such as "The Surrey With The Fringe On Top" from Oklahoma becomes mellow and thoughtful in his hands.

If he was going to do standards (and let's face facts, it's one of the few things record companies think they can sell from heritage acts), he was going to make a real effort at it. Instead of the usual chestnuts, done with orchestra or big band arrangements, Taylor picked the songs that played in his house growing up, largely show tunes. They include "Moon River," "My Blue Heaven," "Pennies From Heaven," "God Bless The Child" and "Ol' Man River," very interesting choices. For the arrangements, he went back to the way he learned to play them on guitar, then worked out new treatments with his co-producer, the fine jazz guitarist John Pizzarelli. So each one has that Taylor-style acoustic at its core, those kinda blue notes he loves to hit. Then his core touring band added to them. There's a unique vocal arrangement on "Almost Like Being In Love" which features his exceptional touring backup singers. "Sit Down, You're Rockin' The Boat" gets another fantastic arrangment, a weave between the singers and the band. His gentle take on "God Bless The Child" features stirring dobro lines from the Nashville great Jerry Douglas.

Taylor is about to embark on a major cross-Canada tour in April and May, and after seeing his last local show a couple of years back, I heartily recommend it. He puts on one of the most positive, affirming shows, showering the people with warmth and appreciation from the stage. Ohh, and Bonnie Raitt. It's a must.
Posted by Bob Mersereau at 12:57 PM No comments: 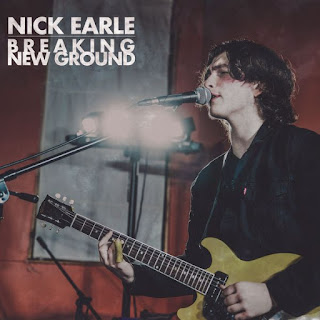 Is it too early to be talking, dare I say it, summer? This spate of fine weather (here on the East Coast) has us thinking signs of spring, but now I've seen the first mentions of acts playing at the upcoming summer music festivals as well. It's just been announced that Newfoundland's Nick Earle will be returning to N.B.'s Larlee Creek Hullabaloo in August, where I caught his set last year. This time it will be a full-band show. Earle's been moving fast since the split of the award-winning Earle & Coffin duo. In 2019 he put out his debut solo work, Breaking New Ground, and now he has a new one coming in April, this time with his touring band, called Nick Earle and the Restless Hearts. A first single, "I Wanna Know," is out now gaining spins and streams.

While we wait for the new album, I thought I'd take the opportunity to get caught up on his last one. Breaking New Ground was an apt title. Working on his own, Earle has moved away from the acoustic blues of Earle & Coffin, instead showcasing his roots-rock side. Nine of the ten tracks are originals, and feature catchy melodies and great vocals from Earle. He has an appealing voice, warm with lots of heart, a pleasure to hear. The album is almost all a solo affair, with Earle covering all the guitars and bass, Dan George handling drums and Islanders Quote The Raven on backing vocals on four cuts. Rachel Cousins adds a fine duet lead on "Only Wanted You," which the pair co-wrote. Earle impresses throughout on guitar, especially lots of slide licks. And while he doesn't surpass Bonnie Raitt's cover of "Angel From Montgomery," he still nails it, and it tells you a lot about the songwriting he admires.

His own writing is showing lots of spark and promise as well. "Back In Montreal" is a solid road trip story, and it definitely feels like we're still at the start of a long journey for Earle, talent on the rise.
Posted by Bob Mersereau at 12:23 PM No comments: 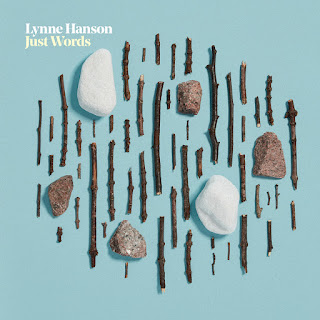 The last couple of years have seen Lynne Hanson stretching way past her comfort zone. First she teamed up with fellow Ottawa folkie Lynn Miles for the acclaimed duo The LYNNeS, with the album Heartbreak Song For The Radio, and lots of touring on top for that. That meant a couple of new roles for Hanson; being a co-writer, and being the lead guitar player, often electric. That stretching has continued for her latest solo album, one that's different from any of her previous efforts.

Just Words sees Hanson adding more, I mean a lot more, electric guitar to her songs, certainly pushing past her folk sound into the edgier side of roots music. The title track, "Just Words," is punctuated by dark and nasty guitar lines and effects, to match the intense lyric, a song about the devastating effect of verbal abuse. While it's the toughest song in the collection, most of the rest also feature lead electric and smart arrangements.  Veteran producer Jim Bryson came on board to amp up the edge, and it works very well. Hanson's lyrics, some soul-searching and others sharply observational, feel just that more piercing.  The teamwork is special too. As well as Hanson's guitar, Bryson and guest Kevin Breit star on lead, and there are rich harmony lines all the way through, from Tara Holloway, Catherine MacLellan and Justin Rutledge. Big changes, great results.
Posted by Bob Mersereau at 9:13 PM No comments: 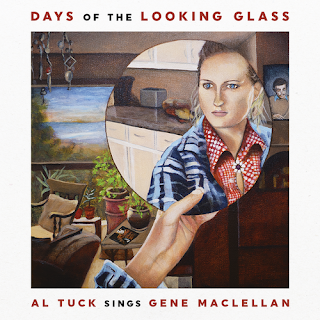 Tuck has always been a devotee of his fellow Island songwriter, and here he presents a nuanced look at MacLellan's rich catalog. With quiet instrumentation and slower tempos, we all lean in for a closer study of the lyrics, Tuck's wavering vocals highlighting both the beauty and the sadness. Drops of pedal steel, along with surprising touches of penny whistle and clarinet highlight the laid-back, clubhouse feel of the recordings.

Wisely Tuck leaves "Snowbird" off the setlist, that song's fame too much for this nuanced collection. But "Put Your Hand In The Hand" is here, a reminder of the great quality of that Christian anthem, presented here with a shuffle beat, as catchy as always. "Street Corner Preacher" is successfully turned into a much bluesier number, losing the dated arrangement of MacLellan's early '70's recording. Even "Days Of The Looking Glass" (along the same theme as "Dreams Of The Everyday Housewife" by Glen Campbell) loses its sentimentality, and becomes a wise look at how life slips by. And that's the real success of the album, bringing the songs out of their decade into this one. Tuck has added an edge, and more of a roots feel to these gems. If any Canadian songwriter needs that, it's MacLellan, whose own fine recordings are long out-of-print.
Posted by Bob Mersereau at 11:35 AM No comments:

MUSIC REVIEW OF THE DAY: RICH JUNCO - ONE WAY TRACK 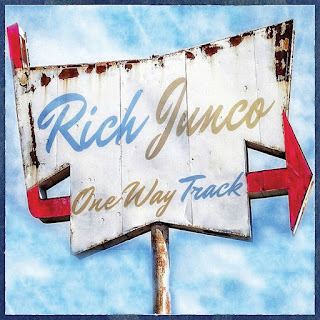 Last week the annual Maple Blues Awards were handed out, trophies for the usual categories, such as best recordings, best singers, best players, etc. But the award that always captures my attention is one that is unique to Maple Blues. It's the Cobalt Award, which goes to the best contemporary blues composition. In other words, the person who has written the best new blues song.

The award was set up by a fine writer himself, Paul Reddick. His intention was to "encourage and support blues music by promoting the creation of new songs that both draw on the rich traditions of the genre and manage to strike a fresh chord with contemporary audiences." That's key, because blues is a classic form, and needs to be kept alive by advancing, not relying on cliches.

This year's award went to a New Brunswicker, Rich Junco, for his song "Cope." It can be found on his new release, One Way Track, released in December. Fresh it is. There are no Robert Johnson covers, none of the usual 12 bar classics, no Stevie Ray salute. Instead, Junco is a songwriter first, with thoughtful lyrics, no throw-away lines repeating all the blues tropes. You can stop any song and grab a cool couplet, such as "Everafter"'s gem, "You took the harness from the plow/and hitched it to a sacred cow."

The production is simple but rich, made in Memramcook N.B. by Mike Trask, a solid band sitting close over four days, recording on analog tape. The award-winning "Cope" is the richest track for sure, with a Band groove, with tight horn parts from Seb Michaud, Carter Chaplin playing a sharp, sweet lead, and Christien Belliveau supplying meaty, tight drums. Junco himself has one of those relaxed voices, full of character, sounding somewhere between Leon Redbone and Dutch Mason. As befits the Cobalt Award-winner, Junco has carved out a place by putting his own stamp on the blues.
Posted by Bob Mersereau at 10:00 PM No comments:

MUSIC REVIEW OF THE DAY: CAVEBOY - NIGHT IN THE PARK, KISS IN THE DARK 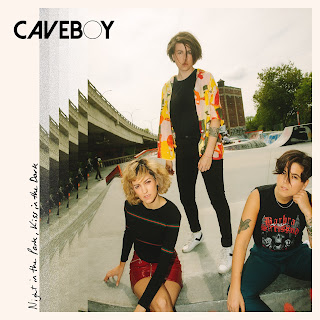 Montreal trio Caveboy has been busy building a sterling live reputation the past few years, getting ready for this debut album, since created buzz with a 2015 EP.  Early singles from this have already grabbed them lots of attention, including the CBC Music #1 "Hide Your Love," showcasing a sublime and catchy groove, sounding retro and current all at once. It's dance but it rocks, chill but lively, heavily produced but still emotional and personal, heck, it's everything.

I like all the mystery found in the production (Juno-nominated Derek Hoffman) and vocals, a tension threaded through the ten tracks. Singer Michelle Bensimhon has an addictive voice, parts Kate Bush and Martha Wainwright, selling those little mysteries with passion. Electro-pop with retro sounds is an easy description for this, but the best old-school trait is the hard-earned quality in the songwriting, each track offering substance plus hooks. There's still room for a little dance floor euphoria too, "Landslide" just a joy start to finish. This is a band to love.
Posted by Bob Mersereau at 4:45 PM No comments: