MUSIC REVIEW OF THE DAY: JONT - THANK YOU FOR THE MEDICINE 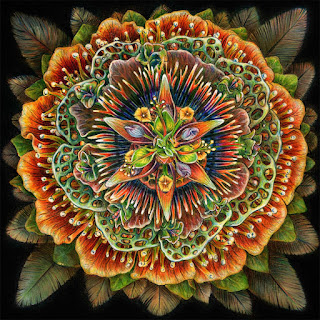 Jont always has a big message, finding a place of peace in a crazy world. As things have got bigger and crazier, the Halifax-based British troubadour has reacted appropriately, making that message bigger and clearer, for those searching for personal peace in dramatic times. His acoustic music has exploded in all manner of ways. There are big choirs of voices, beats, strings, textures, and a bunch more joy infused throughout.

It's hard to resist the synth burbles and big choral hugs of "Surrounded By Love," Jont and the gang reminding us "Surrounded by love, it's such a simple recipe." But he doesn't have blinders on, acknowledging all the heavy feelings and failures to overcome: "We're going to be told a load of lies/how to be scared and how to close our eyes/we've been led by villains and fools/it's time to leave 'em behind, there's work to do." There are a couple of string-and-piano numbers about the individual power of love, but the bulk of the album is devoted to pumping you up, on both a personal and global citizen level. They do the trick; if we ever get back to live shows, this is festival rave material.
Posted by Bob Mersereau at 5:32 PM No comments:

MUSIC REVIEW OF THE DAY: JULIAN TAYLOR - THE RIDGE 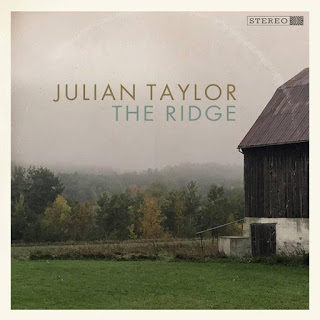 Toronto's Taylor isn't sitting still, even in these Covid times. Scheduled for the fall, Taylor has bumped up release of his latest in case we need some musical inspiration. And he's taken a sharp left turn stylistically too. The hook-heavy r'n'b of his Julian Taylor Band albums has been replaced by an acoustic-based roots sound that showcases his songwriting chops.

Recorded at Blue Rodeo's Woodshed studio, the eight-song set certainly feels more rural than urban, farm over funk. In fact, the title cut is a tribute to summers spent on his grandparents B.C. farm. Personal lyrics and snapshots fill the collection, with Taylor writing about family, memories and emotions. Country flourishes from Burke Carroll's pedal steel and Miranda Mulholland's fiddle sweeten the tunes, while Taylor unveils a low croon for these intimate numbers. While the pictures are personal, the themes are universal; "We all feel out of place/in this Human Race."

Given his multiple talents, Taylor can't help but broaden the sound later on in the album. "Love Enough" sees him in more of a Tex-Mex/Mavericks mode, while "Ola, Let's Dance" is mostly a spoken word over music piece, a la Bruce Cockburn. Direct and simple (as in well-communicated), Taylor's lyrics hold up to the scrutiny this music allows. I was already a fan of his soul music, and now he's added a whole new and welcome dimension.
Posted by Bob Mersereau at 3:26 PM No comments:

MUSIC REVIEW OF THE DAY: RACHEL BECK - STRONGER THAN YOU KNOW 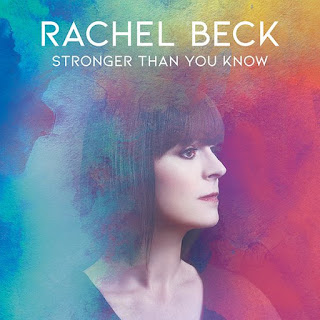 P.E.I.'s Beck returns with a second set of shimmering pop, produced with East Coast atmosphere by Daniel Ledwell. This one leans a little more into the pop side than her self-titled debut, her mellow and moody vocals wrapped around electro keyboards and beats on cuts such as "Dancin'." But it's not about partying; "We take and take and take and take," she warns, "We're dancin' on our grave."  The message, gracefully delivered throughout the six-track E.P., is that together we can make a difference, and given what's happened in the past few months since the songs were written and recorded, it seems timely and prophetic.

There's an empowering tone to the songs, especially lead track "Warrior," inspired by the strength Beck sees in her young daughter. It's both a celebration and a hope for the future: "Lift up your voice, cut through the noise." The title cut connects those hopes to nature, our best source of strength when we embrace it: "Just breathe in and let it go, you're stronger than you."

The set closed with Beck back at the piano for the quiet, intimate "Tonight," intense and romantic in its calm beauty. The real strings, from Islanders Kinley Dowling and Natalie Williams Calhoun perfectly soar into that nighttime, and show the Beck-Ledwell team work old-school magic as well. The E.P. is ethereal, uplifting, and even a tiny bit mystical.
Posted by Bob Mersereau at 2:26 PM No comments: 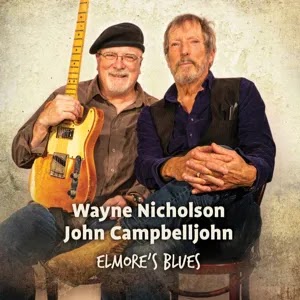 Two blues-rock lifers here, Maritime favourites, team up for the first time on this fiery tribute to slide master Elmore James. James was loud, loud, and his songs lend themselves to the rock side of the equation, and these two fit that bill. Nicholson long been regarded as having one of the best sets of pipes to fill the bars and halls of the East Coast, from his days in Horse and Oakley and through his solo years. Campbelljohn is a multiple award-winner for his guitar prowess, and a festival favourite. It's an inspired match.

The James songs have lost none of their power over the years, and never seem dated. The duo keep all the grit the songs require, and bring in a few surprises to the arrangements. "I Believe" gets a reggae groove, powered by Kim Dunn's organ (another East Coast all-star there). "Rollin' and Tumblin'" gets even deeper and nastier than most versions, Nicholson and Campbelljohn growling at each other, duelling in voice and slide. "Shake Your Money Maker" turns into a showcase for the band, with shout-out solos for bassist Bruce Dixon, drummer Neil Robertson and pianist Barry Cooke.

The pair goes for some deeper cuts from the James catalog, including "Sunnyland" and "Knocking At Your Door," while avoiding adding another cover of "Dust My Broom" to the overstuffed pile. With 12 James songs in the can, they couldn't pass up an opportunity to write a couple themselves, and both "If I Was Blue" and "Dancin' With The Blues" feel right at home. Simply put, blues fans: Great singing, great guitar playing.
Posted by Bob Mersereau at 3:38 AM No comments:

MUSIC REVIEW OF THE DAY: THE SUN HARMONIC - IT'S ALL OKAY, THANKS TO YOU 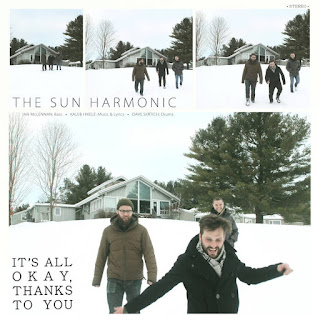 Keeping up with Toronto-based artist Kaleb Hikele is a challenge, thanks to his many musical shifts. He makes music under the name The Sun Harmonic, which used to be just him, but whaddya know? Now it's a full band, as Hikele has been joined by Ian McLennan on bass and Dave Skrtich on drums. The reason behind this latest switch is that Hikele has moved on from his last, piano-driven lush projects and made a straight-ahead rock EP, five songs with grooves and great melodies.

Hikele always has a knack for fine tune, so this certainly isn't a stretch for him, he just had to leave his jazzy-folky-classical sounds at home. "Get Lost" is the calmest number, with a bluesy guitar in some dreamy moments. "A Question For You" dials up the funk and even adds a little raunchy guitar mid-way. The title cut is a brilliantly happy romp, the kind of cheerful pop song you just don't hear anymore, with a la-la-la wordless chorus of singalong fun from the whole group.

It's a bummer of a time for so many people, with lots of serious issues of which we need to pay close attention, but spare 17 minutes for this feel-great five-track EP.
Posted by Bob Mersereau at 7:05 AM No comments: