MUSIC REVIEW OF THE DAY: THE KINKS - PART 1. LOLA VERSUS POWERMAN AND THE MONEYGOROUND 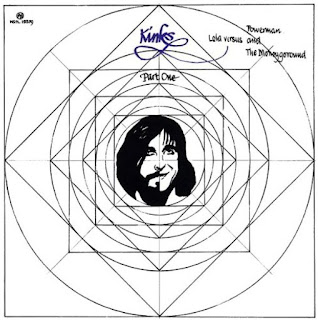 Best known for delicious hits and brotherly feuds, The Kinks remain more famous than popular. Despite chart-topping singles in three decades, The Kinks haven't maintained the sales status of their closest contemporaries, The Who, The Beatles and The Stones. And several of the group's very best albums continue to suffer ridiculous neglect. And don't say that they were too British; they didn't sell there either.
Fifty years ago, case in point: The band had a hit single on both sides of the Atlantic, the saucy "Lola," somehow bending genders into the Top 10, #1 in England. The jokey "Apeman" did pretty good as a follow-up too, but still the album stalled out in the mid-'30's in the U.S., and didn't chart at all in England. It seems the band was stuck between two worlds; pop hits and concept albums, and the concepts were a little too hard for the kids to fathom. Starting with 1968's The Kinks Are The Village Green Preservation Society, and continuing with '69's Arthur (Or the Decline and Fall of the British Empire), this album featured a full concept to rival The Who's Tommy, and lots of Ray Davies' growing theatrical flair.
This two-disc reissue is edited down from the new mega-box issued for the 50th anniversary, and is no doubt a better and cheaper introduction to the album. Disc one features the original, plus some mono single mixes of the hits. Disc two sees the album repeated in alternate versions, some demos, some alternates, some live and a couple of complete tracks dropped from the album back in the day. The story is pretty much about all the garbage and trickery a rock band goes through, thanks to the lawyers, agents, managers, groupies and all the other people trying to take a bit of your soul and a lot of your money. This was very much on Davies' mind at the time, as he was nearing the end of a crushing lawsuit with original management, and had seen his money tied up in proceedings and the spoils divided by countless greedy hands around the world.
That's best described in "The Moneygoround," which names names involved in the suit, and how publishing gets split and split among companies around the world doing not that much other than signing cheques to themselves. "Top Of The Pops" is a very cynical look at success, and how the fame game works as you climb the charts. There are more reflective numbers as well, among the best cuts. "This Time Tomorrow" sees our narrator looking down from another trans-Atlantic flight, taking stock while he can, the trip the only quiet time. "Strangers" is one of the great Kinks album tracks, an almost hopeful song about unity, but at that point in the album, the divide-and-conquer people hadn't entered. The set does end in a positive light though. Our hero, despite all the ill treatment done in the name of commerce, retains his humanity and protects his art, things more precious than cash.
The Lola album is the last great Kinks release. After that, Davies got too enamoured by his concepts, and throughout the mid-'70's delivered a run of increasingly difficult sets, slaves to the story rather than the songs, especially the ones developed around theatrical scripts. Muswell Hillbillies was quite good. Soap Opera was a mess. But the three albums ending with Lola match the great periods of The Who, The Beatles and The Rolling Stones, those glory years of the late '60's and early '70's, and deserve to be heralded as such. Me, I think I'm going to go back and buy those Super Deluxe sets.
Posted by Bob Mersereau at 4:18 PM No comments: