ROCK HALL SHOW ONE OF THE BETTER CELEB DVD'S 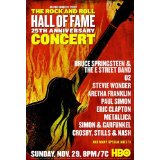 A year ago, a huge, 2-night tribute was held at Madison Square Garden for The Rock And Roll Hall Of Fame's 25th birthday.  As opening speaker Tom Hanks makes clear, rock and roll was invented in the U.S., so this certainly is the American/Rolling Stone Magazine official version of what constitutes its finest moments..  Officially blessed and sanctioned favourites U2, Springsteen and Metallica hold court, with guests such as Mick Jagger, Fergie and Billy Joel along to cameo in the middle of their sets.

We can all argue the merits of who is and isn't in the Hall Of Fame, but the important thing here is whether the concerts make for a good DVD.  Rolling Stone trumpeted this as one of the great live shows of all time, but star power alone doesn't insure this.  Usually multi-artist formats almost always include messes and missed cues, egos and tantrums.  Technical problems (edited out) marred Stevie Wonder's set for instance, and apparently Aretha Franklin was wacky to work with.  And even editing can't make everything seem perfect.  U2's set, featuring Jagger, Fergie, and Will. I. Am falls flat.  The band can't replicate the sinister edge of Gimme Shelter, featuring Fergie and Jagger posing.  U2 just aren't set up to be somebody's backing band.  But Springsteen's crew can sure do it, as they prove with fine guest appearances by Sam Moore and John Fogerty, and on a stunning modern take on The Ghost Of Tom Joad with Rage Against The Machine's Tom Morello.

Crosby, Stills and Nash sound much better than normal, with fine versions of Woodstock, Almost Cut My Hair, and in great harmony on Jackson Browne's The Pretender.  When they join Paul Simon for Here Comes The Sun, it's goose-bump beautiful.  Jeff Beck, subbing for an ailing Eric Clapton, was suburb, a real revelation.  So there are plenty of highlights, a few stomach-turners (anything with Sting), and a couple of truly amazing moments, which make this a must-own set.  Three discs, including several bonus songs not included on the original TV broadcast.
Posted by Bob Mersereau at 5:21 PM