MUSIC REVIEW OF THE DAY: BEST OF APPLE RECORDS 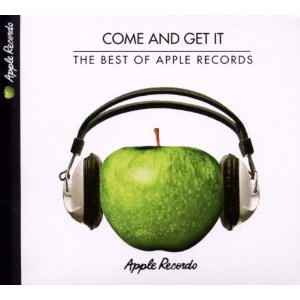 COME AND GET IT - THE BEST OF APPLE RECORDS

The folly of The Beatles' venture into commerce is well documented, with the whole Apple concept a miserable mess, from its clothing boutique to the film department to its electronics division all a joke and big money losers.  Such was the bad state of the books that the notorious Allen Klein was brought on board against Paul's wishes, to fix things.  This helped kill the mighty band, so Apple can only be seen as a failure.

Still, there was one good apple amongst the rotten ones.  The music division did have its share of hits and artistic triumphs, and since The Beatles records and subsequent solo albums ended up on the label, it was financially solid.  Yet like the group themselves, there was much experimentation, silliness, and vanity included in the label's output.

Most of the catalogue has been untouched in the CD and download eras, until now, with a new set of discs that cover the highlights and some obscurities as well.  Along with those full albums, there's also this compilation, a best-of from the label, that pretty much covers all corners of what they did, with the exception of any Beatles tracks.  There's the truly excellent band, Badfinger, represented here with their hits Come And Get It and Day After Day, plus the group's early track as The Iveys, Maybe Tomorrow.  The other hitmaker was cute singer Mary Hopkin, with her music hall singalongs Those Were The Days and Goodbye.  There's the one that got away, James Taylor, with Carolina In My Mind, inexplicably unnoticed until two years later and Sweet Baby James, for another company.

As for the rest, you can't accuse The Beatles of not being involved or trying.  George recorded a bunch of Krishna Temple singers, John had a reggae group doing Give Peace A Chance, Paul wrote a soundtrack song for a brass ensemble, and Ringo played with whoever asked him.  Even buddy Billy Preston, fresh off his guest appearance on Let It Be, couldn't get a hit out of his singles, nor could early 60's hitmakers Ronnie Spector and Doris Troy.

Some of these tracks are pretty good (Preston), some questionable (Spector), and some just bizarre (the previously unheard King Of Fuh...get it?).  At 21 cuts, you'll find something worthy, and at least everything's interesting, which was the whole point, wasn't it?
Posted by Bob Mersereau at 5:04 PM