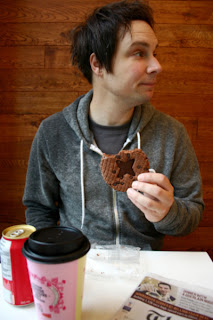 Saint John, NB artist Jason Ogden is Penny Blacks, at least in the leadership role.  The "group" can expand to seven pieces, or just be him solo, and this 5-track EP is a one-man band job, aside from a couple of guest spots.  Recorded in the spare room (I love that), it's higher than low-fi, but pretty much that volume.  Ogden takes us through a few styles in a quick 20 minutes, from country (Your Wedding Ring) to could-be pop or punk or whatever he'd want if it wasn't just him and an acoustic and some harmonies.  Some nasty lines in that one though, "..embalmer's fluid doesn't flow quite like blood".

My fave lyric, and title, belongs to lead cut Chop Yourself Into Little Pieces And Mail Yourself To New Brunswick, Canada For Immediate Reassembly.  He-he.  It's actually a sad little number seemingly set out in B.C. ("the worst coast"), with somebody who would rather be in the titular province, missing his love as the rain comes down, and an angel or devil sitting on his shoulder whispering "come home".  That's the entire lyric actually, almost shorter than the title.  Again, he-he.

WIth this second EP, and an on-going collection of home recordings, Ogden says he's going for catchy songs, less wordy and not so bedroom-isolated.  He does have a bunch of lyrics, but he's an interesting writer, and his acoustic work is confident and enjoyable.  Sigh.  Another punk, maturing into a songwriter.  He even pulls off a very nice, lengthy and ear-sweet opus, called Socorro.  Well played and sung, Penny Blacks.

Catch Ogden in action Wednesday, June 1 at the Vintage Bistro in Hampton, NB, and the full band is going to play at this year's Folly Fest, happening in Gagetown, NB June 29 - July 1.
Posted by Bob Mersereau at 8:14 PM