MUSIC REVIEW OF THE DAY: ELDER SISTER PLUM - PEOPLE LIKE US 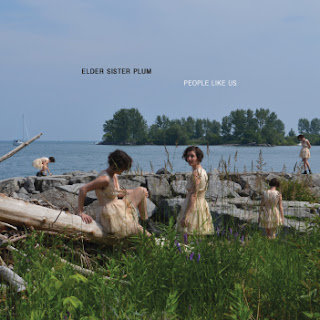 From the Toronto folk circles comes the debut full-length from Tanya Semple, who goes by the old-timey name that suggests something Amish.  But she's far more worldly in the words, and her tunes get some sonic upgrades as well.  The Hempen Jig, basically a Euro-cabaret melody, gets tough with some dramatic, distorted electric guitar and cello, well singing, "Remember, it's only flesh and bone, so go ahead, take my body."  Not Amish.


Elsewhere, things are a little more plain, such as on Platonic Lover, a tune played on a slightly rickety upright piano, its biographer tone and vocal reminiscent of Julie Doiron.  Your Name is more upbeat, almost pop, but with the simplest of bands, the same piano, splashy natural drums and handclaps.  There's even a lullaby of sorts, Grand Escape, with its gentle acoustic joined by the mellow cello.


The best attraction here is this interesting writer, singer, and personality.  Semple's stories are slightly mystical, not so much in words as in atmosphere and delivery.  There's a charm on the more toe-tapping numbers, and a hypnotic effect on the ballads.  It doesn't take long to become enamored with her voice, and the lyrics keep giving:  "We hadn't even spoken, but that's what dancing's for."  Not Amish, no.
Posted by Bob Mersereau at 9:08 PM