MUSIC REVIEW OF THE DAY: RICK FINES - SOLAR POWERED TOO 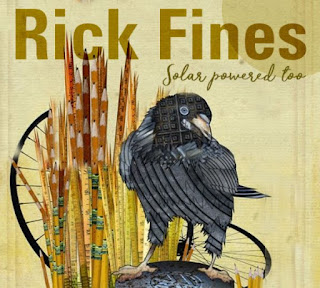 Life and its lemons haven't stopped Fines. As the gigs dried up in the pandemic, the veteran roots troubadour did the other thing he does very well, and crafted us a bunch of new songs. Picking up on the back-to-basics vibe many of us have employed during these strange times, Fines headed to his Kawartha, Ontario cabin to make some back-to-basics music. This meant some mostly guitar-and-voice roots/blues songs, using a set-up he's employed before, recording using solar power, lots of fresh air and a few crickets for ambiance. That's about half the material; the rest needed some rhythm, backing vocals and a few more touches, so those were done back in Toronto.
Either way, the songs have Fines' relaxed warmth, highlighted by his storyteller vocals and guitar ease. His playing, especially his ringing resonator licks and bright picking, seems to flow effortlessly as he spins his solo tales. Meanwhile, "You Only Want Me When You Need Me," written with Matt Andersen, sizzles along with full band fun, lots of Fines' guitar solos and soulful vocals from Samantha Martin and Delta Sugar. "Yellow Moon, Indigo Sky" is a country-Cajun romp with Jimmy Bowskill's fiddle and Fines' long-time recording and touring pal Suzie Vinnick supplying the duet vocals. I like the mix of solo and accompanied tracks, and as always with Fines, the overall top quality of singing, writing and playing.
Posted by Bob Mersereau at 3:18 PM