MUSIC REVIEW OF THE DAY: EDGAR BREAU - SHADOWS OF ECSTASY 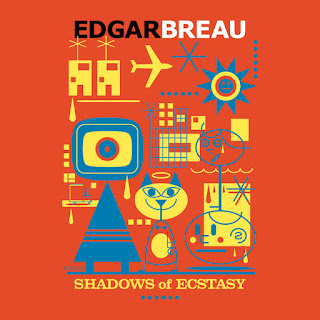 There's no more intriguing story in Canadian rock circles than that of Hamilton's cult classic group Simply Saucer, and it's leader, Edgar Breau. Now it's become even more interesting, with this set, Breau's previously unreleased first solo album, from 1990. The group started out in the '70's as a no-hit wonder, with a failed single to its credit and a smattering of interest in the southern Ontario punk scene. But they had done some demos in the Lanois brothers studio (Bob recorded them, Daniel says he was away for the sessions), and a live show was taped. Over a decade after the band split, a local writer released an album called Cyborgs Revisited, and over time it became an underground favourite, with press raves in North America and Europe. It was a unique, missing link album that fit somewhere into between prog and art rock bands such as The Velvet Underground and Barrett-era Pink Floyd, and later visionary acts Talking Heads and Television.
Meantime, Breau had reconsidered his place in music and become an acoustic folk performer, albeit a quirky one. He had mad skills on acoustic guitar and admired British players. But here he was in a quandary, with a growing rep for Simply Saucer. By the 2000's, Breau had come to grips with past and present, reformed the group and embarked on a career both solo and with the band, which continues with aplomb.
One part of the story remained unresolved though, those 1990 sessions he recorded. Breau had basically given up on music as a career at that time, and shelved the project. Eventually he reworked some of them over a decade later when he revived his career, but this set remained a full, unheard piece.
It's a gem, no surprise, and finds Breau at an intriguing crossroads in his writing. While they are acoustic based, the cuts are full-band numbers, with old Saucer bandmate Kevin Christoff on bass, plus drums and electric guitar. Breau's quirky vocals are augmented with harmonies from Compton Roberts, and his acoustic licks weave gently with the electric instruments. It's somewhere between his future solo folk and his previous Saucer psyche, but like all his work, utterly unique. The melodies are dreamy and quite beautiful, a contrast with Breau's warble. The lyrics are equally eclectic, mesmerizing stories that seem like fiction from an unknown country or a parallel world. Nothing bizarre, just nothing we've heard before.
If you're new to the Saucer world, this isn't a bad place to fall into the rabbit hole. For fans it's a great joy, the best of both worlds Breau solo and Saucer-shaped.
Posted by Bob Mersereau at 11:35 AM