MUSIC REVIEW OF THE DAY: MICHAEL DARCY & THE ATLANTIC TRAMPS - DOWN TO THE ROOTS 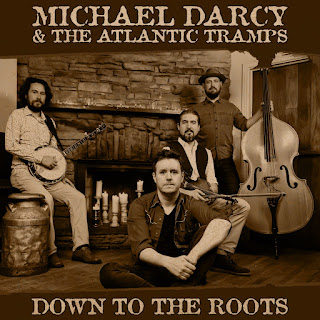 An Irish import to Toronto, Darcy's first album, Simple Drop Of Rain from 2019, was more of a singer-songwriter set. For this, the electric instruments and drums were dropped, in favour of his all-acoustic, trad backing band The Atlantic Tramps, and a full-on roots set. It's a fascinating blend, definitely Irish but with some North American flavour sneaking in via the banjo and fiddle. Darcy does a couple of well-known traditional tunes ("Wild Rover No More"), and modern favourites (Richard Thompson's "Beeswing"), but mostly these are his own tunes, highlighting his excellent wordsmanship.
"The Ballad Of Uncle Frank" is an evocative family tale, a classic leaving Ireland story from the 1860s, certain to resonate with any fans of seafaring folk. "Sweet St. John's" is a tribute to the first place an immigrant lands on his voyage to North America, a most glowing report: "Oh sweet St. John's, when the time comes to leave you/just like your Atlantic waters, I'll be left so blue." Ron Hynes would approve.
In the '60s and '70s Irish bands were a dime a dozen in these parts, and left a rich legacy. It's great to hear someone updating that connection, and adding well-worthy songs to the canon. Darcy and the Tramps are launching the album on Thursday, July 21 at the Dakota Tavern in Toronto.
Posted by Bob Mersereau at 11:03 AM