MUSIC REVIEW OF THE DAY: MELANIE PETERSON - WE GOT THIS - SIDE TWO 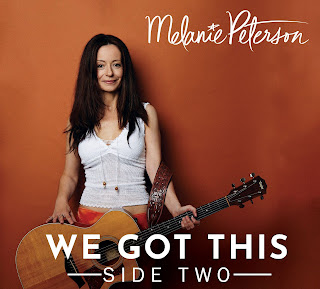 In these confusing times for music, the album seems to be dying in favour of releasing multiple singles over a period of months. Toronto's Peterson has come up with an alternative approach, releasing her latest in a series of two E.P. 's, basically half an album at a time. We Got This - Side Two continues her move toward bigger songs and production, with lots of edge to contrast her sweet voice.
It adds a fun layer to her smart folk-pop. On "Passenger Seat" pretty verses with chiming guitars give way to power chords and drums as it turns into a story of "a couple of wild ones in love." Sharp guitar and swirling organ adds the needed gravitas to "One Tequila," a drinking-to-stop-thinking tune: "He was my favourite song/And I don't want to think about moving on."
Goodbye songs remain Peterson's specialty, and she always gets right to the heart of heartache. In "Ruined Lovin'" she perfectly describes that feeling when you watch your true love walk away: "You ruined lovin' anyone else for me." Hard stuff, not soft at all.
Posted by Bob Mersereau at 3:39 PM