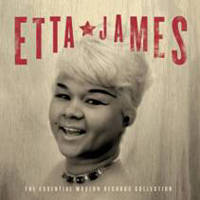 James is in poor health, and there's already been at least one internet-fueled death scare circulating.  That started the accolades, most of which centered on her 1960's hit sides recorded for a couple of Chess Records labels, Tell Mama and other cuts.  Those songs, which got her onto the pop charts, are considered the greatest of her career, but this collection makes a very strong case for her earliest cuts.  It's 15 sides for the Modern label, every one of them them an excellent single, taking James from 50's jump blues into the new, driving rhythm and blues.

Although the details are a little sketchy, the basic story of James' early career can be found here.  She was as young as 14 when bandleader and hitmaker Johnny Otis discovered her in San Francisco and took her to L.A.  She recorded the lead vocal on Otis's smash The Wallflower (Roll With Me Henry), and that led quickly to her own career. Within a year she was touring with Little Richard as a featured singer, and you can hear his influence on the pounding Tough Lover.

While James is primarily remembered as a blues singer, and has even promoted herself under such titles as Matriarch Of The Blues, as these tracks show, she  was not originally influenced much by the Chicago sound.  Her L.A.-based label was immersed in the bigger group recordings that came out of the big band era, and there was a lot more rhythm going on than blues.  Minor hits such as Come What May had elements of pop vocal music, and Shortnin' Bread Rock was an attempt to move directly in to rock and roll.  This shouldn't be used as an argument to discount her later, truer blues; it just goes to show she was a singer first, and also brought a lot of uptempo experience to Chess, forging a different sound, certainly unique among female blues singers.  It's not surprise belters like Janis Joplin borrowed directly from her.

Over the next couple of years, people will discover or rediscover James, and mostly head to the Chess hits compilations.  It's worth finding this new one, distributed by EMI, that adds a whole lot to her story, all of it very good.
Posted by Bob Mersereau at 9:26 AM