MUSIC REVIEW OF THE DAY: STRIPPERS UNION -- THE DEUCE 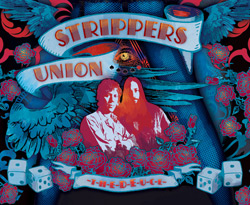 Geez, I hate this group's name.  I mean, it sounds like the latest solo album from Duff McKagan or someone.  But geez, I love this group.  Well, side project is the better term I guess.  This is the second release under the Stripper's pole, featuring Craig Northey (Odds) and Rob Baker (The Tragically Hip).  Geez, I want them to quit their day jobs (and change that name).

The project is about Baker and Northey writing songs together, and getting them on disc.  The band is essentially the rest of the Odds, plus Baker, and pal Simon Kendall on keys.  Full disclosure:  I will listen to Northey sing anytime, especially when he's doing that quirky, nifty pop at which he excels.  Here you have one of the best voices in Can-rock, and on that basis alone, should be added to any group.  When you do get him, he's a hook machine as a writer.  Baker?  You can tell he's having a ball, letting loose and trying styles that don't fit into the Hip machine.  Baker's even singing for gosh sakes, in a low, 'I'm not a lead singer' experimental voice, but hey, that's what side project are for.

Odds fans, check out tracks such as Making Strange and When Your Beauty Fades, numbers that would, should, could make great cuts on the next Odds album if indeed they are still a group.  Then spin to the end, where Baker deconstructs the old Gord Lightfoot number The Circle Is Small, making the infidelity number even more claustrophobic.  While you're listening, I'm thinking up a new name for them.
Posted by Bob Mersereau at 10:03 AM