MUSIC REVIEW OF THE DAY: THE DEEP DARK WOODS - THE PLACE I LEFT BEHIND 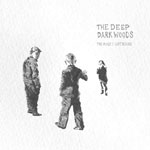 I'm loving the rich sound The D.D.W.'s have developed over their career.  With The Sheepdogs scoring big this week as well, is Saskatchewan the new Seattle?  Dated 1991 reference aside, there's some pretty cool things happening in our most rectangular province.  And rarely does a band have such a wonderfully descriptive name, as the music is getting deeper and darker.

This is a band that knows how to do textures and layers.  On the murder ballad Mary's Gone, an acoustic guitar and vocal is joined slowly by harmonies, vocals, bass, strings, simple drums, piano, pedal steel, and organ, never getting louder, only spookier and more dramatic.  The jaunty Virginia features a combination of organ, pedal steel and fiddle that sees the instruments weave in and out, each one taking a few seconds of prominence, never really soloing, but just taking our attention for a bit.  Old Man Luedecke's guest banjo is bright touch, too.

I shouldn't give the impression it's too dark though, there are plenty of uptempo tunes, such as Sugar Mama, which could have been an out-take from Workingman's Dead.  But this group really does moody well.  The Banks Of The Leopold Canal may be the first song in the greater rock history of Canada to address our country's involvement in The Battle of the Scheldt in 1944 in Belgium.  Cool, huh?  Oh, and special words go to singer Ryan Boldt, whose warm and soothing voice gives the songs much of the timeless quality that makes them winners.  Each one of them brings excellent instrumentation to the table, and it's so refreshing to hear so many ideas and influences and perfect little moments throughout.  Definitely one of my top albums of the year.
Posted by Bob Mersereau at 11:16 PM