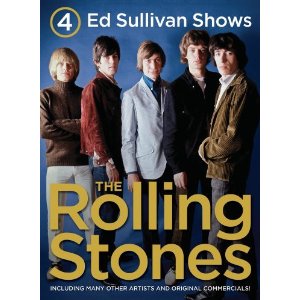 It was so easy in the early to mid-60's.  If you wanted to make it big in the U.S., you had to get on Ed Sullivan.  The show got the biggest stars, and made them superstars.  Diana Ross and the Supremes, The Beatles, The Mama's & the Papa's, the faces of that time were immortalized on the show.

Old-fashioned as the stiff Sullivan was, the program didn't shy away from modern times.  It presented more African-American performers than the rest of network TV in total.  The comedy could be, on occasion, mildly controversial.  And sometimes, the rock music was subversive.

The Rolling Stones weren't even hit-makers in the U.S. when they first appeared on the show in May of 1965, but they were famous by reputation as the dirtier version of The Beatles.  We're now so used to the sight of MIck and the boys that the shock is gone, but at the time they caused strokes in parents, and raw excitement for anyone under 20.  It was great TV, before anyone understood the concept.

There are four complete Sullivan shows over two DVD's here, featuring the Stones and a variety of acts, plus all of Ed's chat, and even the original commercials.  It's an amazing, often hilarious snapshot of the entertainment world, on the cusp of a dramatic cultural shift.  The first show here is even in black and white, which is pretty wild to show your teenagers.  The jugglers and clog dancers that seemed so interesting back then seem hopelessly lame now.  Take the woman balancing a tray of glasses without spilling; That's all you do?  And I thought I loved that little puppet mouse, Topo Gigio, but now it's awfully annoying.

And the Stones?  Friggin' great, of course, and blessedly, mostly live, or at least real vocals over backing tracks.  Watching them do Howlin' Wolf is a thrill, a great reminder of how strong a blues band they were.  Watching a truly bizarre Brian Jones playing sitar for Paint It, Black must have blown minds back then.  And of course, the infamous CBS censorship of Let's Spend The Night Together into Let's Spend Some Time Together was pointless, with the band simply sneering their way through it.  We also get Satisfaction, Lady Jane, As Tears Go By, 19th Nervous Breakdown and more.  The Beatles might have been bigger hits, but the Stones did better TV.
Posted by Bob Mersereau at 6:43 PM