MUSIC REVIEW OF THE DAY: TOM JONES - SPIRIT IN THE ROOM 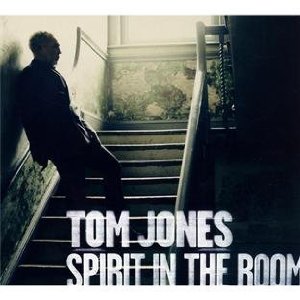 Can we take Tom Jones seriously?  And that's a serious question.  His career was long based on the histrionic over-singing found on Delilah, What's New Pussycat, It's Not Unusual and the like.  That put him on TV, sent him to Vegas, and gave him a huge audience along the lines of Neil Diamond and Barbra Streisand, an older crowd shall we say.  There's nothing wrong with any of this of course, and his hip-shaking antics and ridiculously catchy hits were fun if nothing else.

But he always wanted to be taken seriously, too.  Watch old episodes of his TV show, and there he is jamming out with Janis Joplin, Wilson Pickett, CSNY, matching them note for note.  Then came modern collaborations with everyone from Pet Shop Boys to Portishead.  For the past few years he's slowly been working his way into senior statesman of blues and soul status, with U.K. festival headline slots, and hipster appearances with hot star Jessie J, and important TV shows such as the Jools Holland program and even the Queen's Diamond Jubilee.  His last album, 2010's Praise And Blame saw him a roots artist, singing blues, gospel, traditional and country songs, under the production of the very hot Ethan Johns, and it was received very well.  The campaign towards seriousness seems to have worked.

Now comes the new Spirit In The Room, again produced by Johns, and with songs in the same categories.  It's the now-familiar method of doing these aging-stars albums (see Cash, Diamond, Rick Rubin), rummaging through modern songwriter's catalogs, looking for surprises that will grab attention, as well as good songs of course.  This time we get Jones interpreting the modern masters:  songs from Dylan, Cohen, McCartney and Simon are here.  Then there are the next layer of writers, known as brilliant but not quite household names:  Richard Thompson, Joe Henry, Tom Waits, even The Low Anthem's Charlie Darwin is included, plus there's some old blues.

Now, to answer my question about taking him seriously.  I'm sure lots are, and he's certainly earned the beloved entertainer status, plus his OBE from Her Majesty.  Why I'm going to pass is because of what is normally thought of as his number one asset, his powerful pipes.  Man, the guy can belt 'em.  And you can hear him power up the blues from deep down.  But you know what I hear?  Acting.  I hear him forcing it out, over-singing it all, even on the ballads and slow numbers.  Maybe he can't control it, but the man's singing voice dominates every song, so that all you're hearing is him.  Not the words, not the melody, not the instruments, just Tom Jones.  So it's not the brilliant lyric of Tower Of Song from Cohen's pen, it's Tom Jones singing Tower Of Song, and there's no power in the words.

Some of this may be the choice of material.  It has to be a special kind of song, and he has to either back off or have fun with it, I figure.  While he emotes all over blues classic Soul Of A Man, Jones backs off on Thompson's Dimming Of The Day, to better effect.  Same goes for Dylan's recent When The Deal Goes Down, as Jones scores with that, and we can finally get the fact it's a gospel number.  But most of the album sees him in full voice, overwhelming delicate material.  The best song here is actually when he returns to what he's done so well through his whole career, which is have fun.  He covers the old Kenny Rogers and the First Edition hit Just Dropped In (to see what condition my condition is in).  It's a spoof to begin with, writer Mickey Newbury mocking hippie culture.  For the only time on the disc, Johns and Jones relax, have some fun with the production, camp it up a bit, and remind us of Jones' excellent version of Prince's Kiss with Art Of Noise.  Did anybody take that seriously?  No.  Was it fantastic?  Yes.  You know, I think I take Tom Jones more seriously when he's not being serious, if you get my drift.  Come to think of it, I kinda like Delilah.
Posted by Bob Mersereau at 7:50 PM