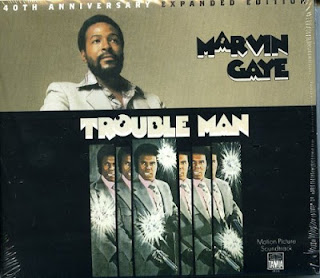 Marvin Gaye was unpredictable by the time he hit the 70's.  He'd fought the control Berry Gordy held over most Motown artists, eventually proving the label owner wrong and out of touch by scoring a huge hit with What's Going On.  Gaye had won artistic control, and set about to do what enthused him, rather than what would sell.  Turns out what he really wanted to do was compose.

Some of his contemporaries had recently had success with the so-called Blaxploitation film genre, James Brown and Curtis Mayfield writing themes for the heroes.  Gaye jumped at the chance, but took it one step further.  Not content to offer up some tunes based on the lead character, instead he set to actually score the whole thing, cues and all, jumping into that complicated bit of work turned art form by the likes of Ennio Morricone, John Williams, and the like.  Too bad the film sucked.  Trouble Man was a bomb, but Marvin delivered a gem of a soundtrack.  The title track, the only real vocal performance on the disc was a decent-sized hit, coming on the back of What's Going On, and the album sold ridiculously well for a mostly-instrumental release, but most fans just shoved it away, waiting until he delivered Let's Get It On the next year.

The disc has always been a favourite of funk fans, and those who don't get bored by instrumentals.  And it's been growing in stature, as the achievement becomes more obvious.  Now comes this deluxe edition that adds a ton of sounds, piecing together all the sessions that went into the work.  As Gaye couldn't write musical notation, he worked with a series of arrangers that scored his ideas onto paper.  But aside from that, he dove into the process, getting into the script, working to write for each scene and individual need of the film.  He composed several tracks that were recorded conventionally, but also went in with a film orchestra.  Some of this was supplied to the filmmakers, other tracks were taken back to the studio so Gaye could compile the album version of the music.  So there are really two different recordings, the music that was used on the film, and the collection of tracks that Gaye decided would make the album.  Then there's the out-takes and works in progress.  Many cuts feature a bit of both sources, as Gaye overdubbed his own sounds on top of the orchestra bed.

Confused?  Marvin worked a lot, and was always tinkering in his creations.  He had lots of ideas, like using the latest synthesizers on top of some of the songs.  He overdubbed sax solos, vocal ad libs, and was still working away when he had to quit and deliver, as the film was coming out.  Finally all that can be found has come out in this painstakingly compiled set, a real case of archeology.  The regular disc is here, easy enough, but so is the entire film score, which had to be sourced from a combination of studio tapes and original prints.  It's really two different albums, plus the various sessions Gaye did later back in the studio.  Just to figure it out, you have to read along with the booklet, scratch your head and think a lot.

So, do ya want it?  It still just has one hit, and one real vocal song, Trouble Man.  And it's still the same issue, unless you're an instrumental fan, it's not going to grab you.  But, if you want a really interesting blend of soul, funk, jazz, all with Marvin's classic 70's groove, subtle and sweet, grab it, and dive in, this is rich stuff.
Posted by Bob Mersereau at 11:23 PM