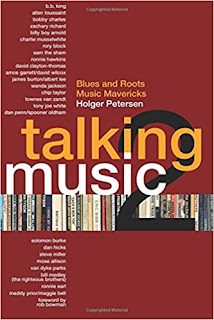 For over 30 years, Holger Petersen has been waving the blues flag in Canada on his weekly CBC Radio show, Saturday Night Blues.  For even longer, he's been releasing some of the best blues, folk, jazz and all-around roots music as well, via his highly regarded Stony Plain Records.  He's a mountain of knowledge, a tireless supporter and a huge fan, and what that has given him is incredible access to some incredible artists.

These aren't the ones who play ball with the press, dutifully do the rounds, shake all the hands, answer all the inane questions.  These are the gifted few that more often don't care a bit about press coverage, image or social media reach.  They just care about the music.  And they all realize that's what Petersen is about as well.  Time after time, he gets those trouble-makers to open up and let us find out a little bit of the real story, the guarded history that usually only gets told in the back seats of the bus.

This is the second volume of Petersen's collected interviews, and even though they were mostly done for broadcast on his radio shows, they are just as engaging in print.  Even the people you thought you knew, like the giant of them all, B.B. King, is seen in a fresh light from Petersen's visit.  He describes him behind the computer screen, which had replaced the old 78's, LP's and cassettes he used to always have with him to hear his own favourites.  King insisted Petersen stay after the interview, just to hang out so he could play him some music by an old bluesman he liked.  You can feel the friendship between the two.

In every interview, he gets amazing lines or insight from his subject.  Describing his lyric-writing technique, Allen Toussaint tells him, "I collect wishbones and feathers everywhere, and try and make a chicken when I get home."  The reclusive, legendary Bobby Charles, he of "See You Later, Alligator," adds this gem about writing: "That’s the only thing that’s hell about it. It’s amazing what you’ve got to go through to put one little song down, you know. For songs that last two or three minutes, you’ve got to go through a life of crap, right?"

Where most interviews would get pat answers at best, Petersen would have them adding little gems and asides to story, free-flowing conversations.  Charles again, back in 1997, letting him in on this kid guitar player he'd been working with:  "A great little guitar player, man, Derek Trucks. He’s a killer. A seventeen-year-old boy. He’s great. Get ready because you’re going to hear a lot about him."  Chip Taylor was happy to admit to being more interested in playing the horses than in his job at the Brill Building writing "Wild Thing" and "Angel of the Morning," rushed out so he could get his bets down.

The extensive list features one character after another, including Van Dyke Parks, Billy Boy Arnold,  and Sam "The Sham", still talking in rhyming patter that outdoes any freestyle rapper.  There's James Burton, Solomon Burke, Wanda Jackson and Townes Van Zandt, David Clayton-Thomas and Ronnie Hawkins filling in the early days of the Canadian scene.   Every chapter, every interview makes me feel like I know each musician well, and that I've learned far more than I knew about them going in.
Posted by Bob Mersereau at 3:55 PM