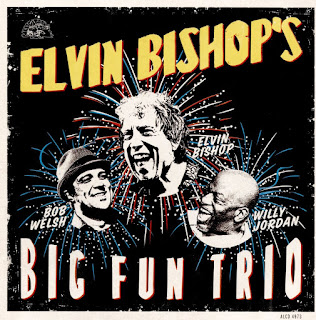 Nobody has as much fun as Bishop, and not many have been doing it as long either, dating back to the Paul Butterfield Band in the late 60's. He sure doesn't sound 74 on this set, and he sure isn't slowing down. His last album, Can't Even Do Wrong Right, won Living Blues' Album of the Year, and he was a 2015 inductee into the Rock and Roll Hall of Fame for the Butterfield group.


This disc came out of a studio jam with pals Willy Jordan (percussion) and Bob Welsh (guitar and piano). Stripped to trio basics, Jordan sitting on his cajon, they fed off each other for energy and a joyous vibe, already a Bishop specialty. He had a bunch of new songs ready, plus they did a retooled take on his number Ace In The Hole, and picked some fun covers to keep the party going. Typical is Let's Go, which the three wrote by jamming together, with a bridge where they simply, infectiously sing 'woah, WOAH.' and it's a ball.


The only other guests are three harp players who each get a cut, and of course Bishop had no trouble attracting the very best: Charlie Musselwhite, Kim Wilson and Rick Estrin. Musselwhite and Bishop team up on the autobiographical 100 Years of Blues, Elvin shaking his head at the hijinks the pair got up to along the way, and Musselwhite even speak-singing a verse. Cue the bad jokes: "We've been around since the Dead Sea was sick." Since Elvin is more of a novelty singer, it's great to have Jordan on board, who does a great job adding the charm to strong covers of It's All Over Now and Let The Four Winds Blow. Believe the title, this is big fun.
Posted by Bob Mersereau at 7:50 PM