MUSIC REVIEW OF THE DAY: ROB LUTES - COME AROUND 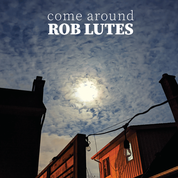 Lutes excels at easy-going songwriting that sounds effortless but is of the finest quality. In fact, he makes it all sound easy. He's a masterful singer and guitar player, and gracefully moves across all the roots genres, equal parts folk, blues and rock. And all these tracks just slide on by, each one a little gem, leaving you feeling grand. Here he's supported by a solid, largely acoustic combo, including his longtime guitar buddy Rob MacDonald, tasty keyboards from Bob Stagg, and smooth, understated harmonies from Annabelle Chvostek.
That doesn't mean the songs are light. "That Bird Has My Wings" is inspired by a book by a death row inmate where hope is found imagining freedom in a bird's flight. In "Lightning," it takes bright flashes of realization to let someone see the truth. It's thoughtful stuff, personal but egoless, life-affirming and above all, full of satisfying songcraft.
Posted by Bob Mersereau at 7:31 PM